Skip to content
For a certain substrate, it may have chance to go through any of the four reaction pathways. So it seems rather challenging to predict the outcome of a certain reaction. We will talk about the strategies that can be applied in solving such problem, and explain the reasonings behind.

It is very important to understand that the structural nature of a substrate (primary, secondary or tertiary) is the most critical factor to determine which reaction pathway it goes through. For example, primary substrates never go with SN1 or E1 because the primary carbocations are too unstable. If the substrate could go with a couple of different reaction pathways, then the reaction conditions, including the basicity/nucleophilicity of the reagent, temperature, solvent etc., play the important role to determine which pathway is the major one. Our discussions therefore will start from the different type for substrates, then explore the condition effects on that substrate.

This is the easiest case. Methyl substrate only go with SN2 reaction, if any reaction occurs. Elimination is not possible for methyl substrates, and no SN1 reaction either because CH3+ is too unreactive to be formed, so the only possible way is SN2.

Primary (1°) substrates cannot go with any unimolecular reaction, that is no SN1/E1, because primary carbocations are too unstable to be formed. Since primary substrates are very good candidates for SN2 reaction, so SN2 is the predominant pathway when good nucleophile is used. The only exception is that when big bulky base/nucleophile is used, E2 becomes the major reaction.

Examples of reactions for primary substrates:

It is most complicated or challenging to predict the reaction of a secondary substrate (2°), because all the pathways are possible. The reaction conditions then become very key factor. The total four types of reactions can be separated into 3 pathway, that is:

It is relatively easy to separate SN2 and E2 pathways from SN1/E1, since both SN2 and E2 require strong nucleophile or strong base that are usually negatively charged species, while SN1/E1 require neutral conditions.

In order to distinguish SN2 from E2, we need to be able to determine whether a negatively charged anion is a strong nucleophile (for SN2) or a strong base (for E2)? All nucleophiles are potential bases, and all bases are potential nucleophiles, because the reactive part of both nucleophile and base is lone pair electrons. Whether an anion is a better nucleophile or a better base depends on its basicity, size and polarizability. Generally speaking, the relative stronger bases have the stronger tendency to act as base; and relative weaker base, with small size and good polarizability, have the better tendency to act as nucleophile, see the list given below.

Please note that bulky bases, such as t-BuO– and LDA, always favor E2 and generate elimination products that follow Hofmann rule, because they are too big to do back-side attack in SN2.

Examples of reactions for secondary substrates:

Tertiary (3°) substrates do not go with SN2 reactions because of steric hinderance. So E2 reaction is the choice when strong base applied, or SN1/E1 pathway with neutral condition (poor nucleophile/weak base). Theoretically speaking, E2 and E1 supposed to give the same elimination product. However, in order to synthesize an alkene from a tertiary substrate, it is a better choice to use a strong base that encourage E2 process rather go with E1. This is because that E1 always combine together with SN1, and it is almost impossible to avoid the substitution product.

The above discussions can be briefly summarized in the table below, followed by several examples. To predict the reaction outcome, or to design synthesis route for a certain case, it is highly recommend that you do the analysis by following the logics mentioned above, instead of just refer to the table. Also, practice makes perfect! 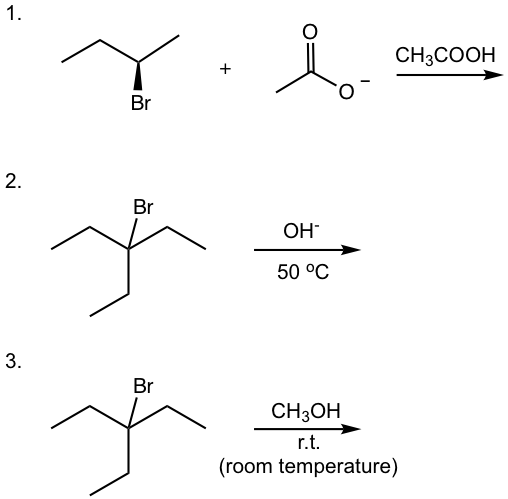 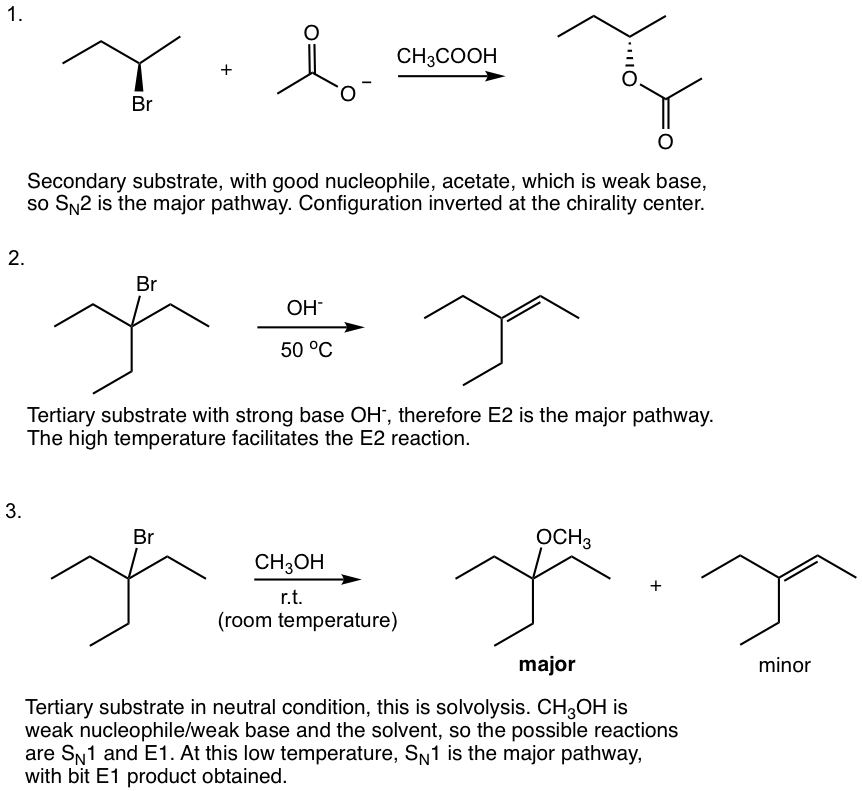