As a general rule, for a compound has n chirality centers, the maximum number of stereoisomers for that compound is 2n.

The four stereoisomers of 2-bromo-3-chlorobutane consist of two pairs of enantiomers. Stereoisomers A and B are a pair of non-superimposable mirror images, so they are enantiomers. So are the isomers C and D. Then what is the relationship between isomer A and C? 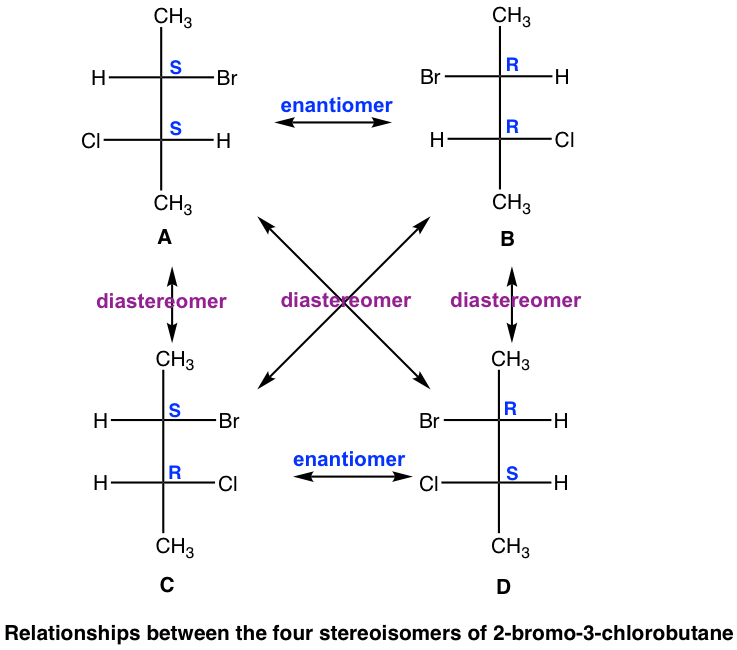 As mentioned earlier, enantiomers are very alike to each other, and they share same physical properties except optical activity (opposite sign for specific rotation). Enantiomers also generally have same chemical properties, except the reaction with other chiral reagents (not topics in this course).

Draw the structures of all the stereoisomers for 1-bromo-2-chlorocyclobutane, and indicate the relationship between any two stereoisomers.

There are two chirality centers for 1-bromo-2-chlorocyclobutane molecule. So the maximum number of stereoisomer is four. To work on the stereoisomers for cyclic compound, we can start with cis/trans isomer, and then check does the enantiomer apply to each case. 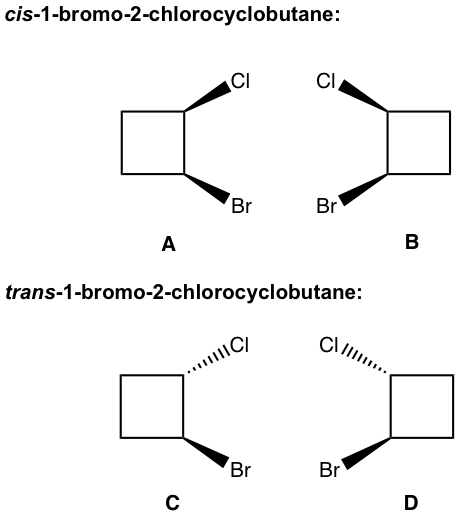 What is the relationship between the following pair of compounds, enantiomers, identical, diastereomers, constitutional isomers, non-isomers?

If this method looks confusing to you, then you can stick to Method I.

You can use either of the above methods, the answer is “identical”.

Next, we will see another example of a compound containing two chirality centers, 2,3-dichlorobutane, the compound that has the same substituents on C2 and C3 carbons.

Theoretically, there are maximum four stereoisomers, the structures are shown by Fisher projections here.

Stereoisomer A and B are non-superimposable mirror images, so they are enantiomers. 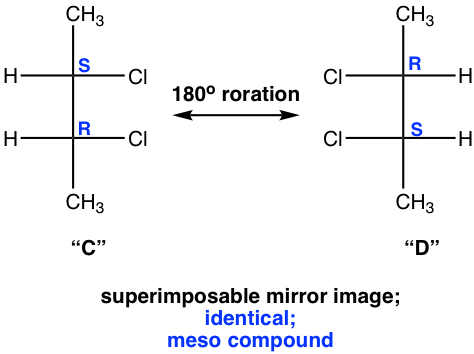 Then “C” and “D” are just different drawings for the same stereoisomer. The next questions is, is this stereoisomer chiral? We have confirmed that this isomer does get superimposed on its mirror image, that means it is achiral.

This is so weird! How come a compound that contain two chirality centers (C2 and C3) is achiral?

Because that one stereoisomer is meso compound, the total number of stereoisomers for 2,3-dichlorobutane is three.

Attention, 2n is the maximum number of stereoisomers. Some compounds may have less than the maximum, because of the existence of meso compounds. 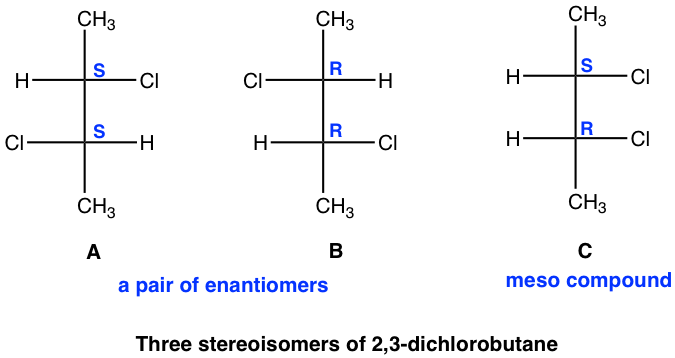 Solutions: there are total three stereoisomers.

5.6.3 Chiral or achiral by looking for Plane of symmetry

The existence of chirality centers does not guarantee the chirality of a molecule, for example of the meso compound. Following the definition of chirality always involve the comparison between original structure and its mirror image, that needs extra work. Is there any easier way to tell whether a moleculeis chiral or achiral?

For the meso isomer of 2,3-dichlorobutane, the plane of symmetry is the plane that is labelled in the structure below. 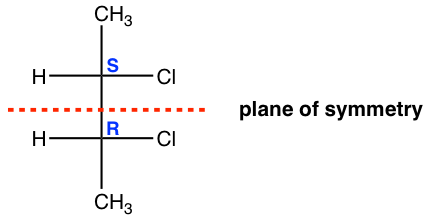 Approach: Determine the R/S configuration of each carbon.

For both structures, the chirality centres are bonded with the same groups, and structure I has R and S, structure II has S and R. Are they enantiomers?

A bit further investigation is necessary to get the conclusion. Let’s rotate the groups around the 2nd chirality centre of structure I (you can use the molecular model to do the rotation, that is very helpful for visualizing the spatial arrangement of the groups):

(You can rotate, or do switches to compare between the two structures, but make sure to keep track on any action. If it is easy to get lost by rotating or switch, assign R/S configuration is a safer way.) 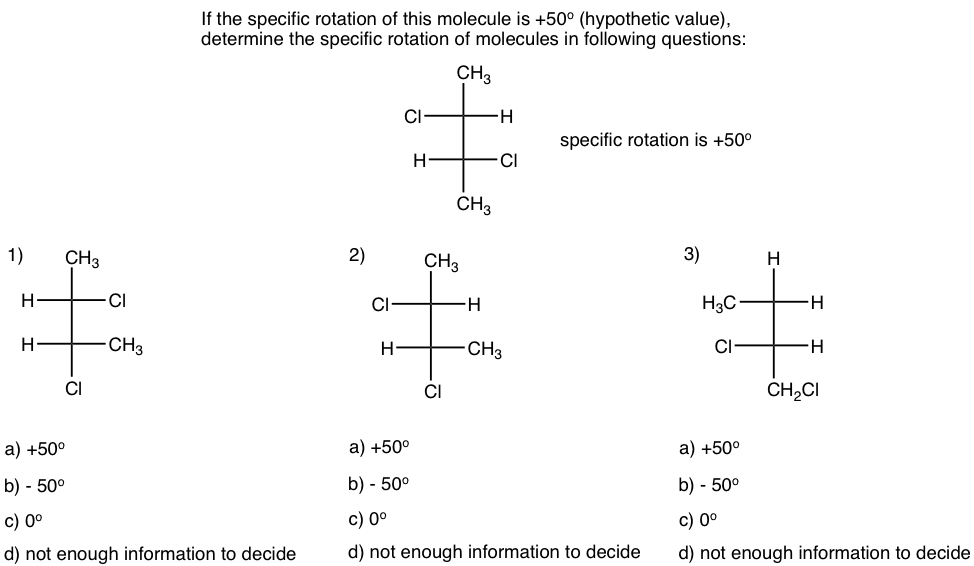 Thinking: Determine the relationship between the molecule in each question with the given one, and apply the knowledge of specific rotation. 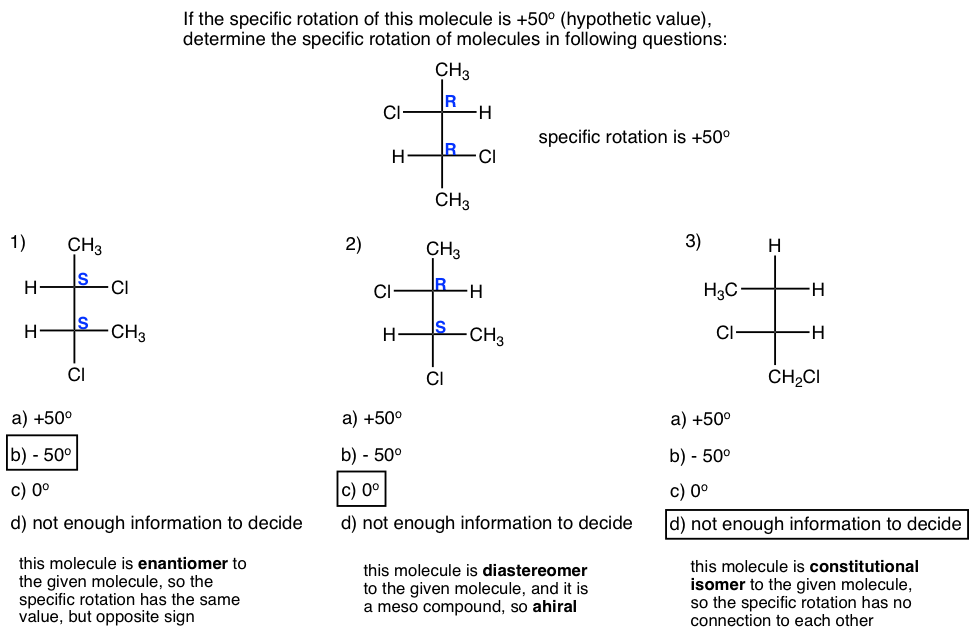