As we discussed earlier, the molecule of 1,4-dimethylbenzene has two sets of equivalent protons: the four aromatic (Ha) protons and the six methyl (Hb) protons. The integration of the area under the peak at 2.6 ppm is 1.5 times greater than the area under the peak at 7.4 ppm. Please note that the integration number show the relative ratio of the number of protons, not the actual number. The ratio 3 to 2 here matches the ratio of actual number 6 to 4. This integration information, along with the chemical shift knowledge we have learned before allow us to assign the peaks: peak at 7.4 ppm correspond to protons (Ha) on the benzene ring, and the peak at 2.6 ppm correspond to two methyl groups (Hb).

In the 1H NMR spectra that we have seen so far, each set of protons generates a single NMR signal. This is not that common for 1HNMR actually. In fact, the 1H NMR spectra of most organic  molecules contain signals that are ‘split’ into two or more peaks that is called splitting (or coupling). The spectra with peak splitting may looked more complicated, however, this splitting behavior provides very useful information about the structure of a compound.

Let’s consider the spectrum for 1,1,2-trichloroethane (Fig. 6.7b).  In this and in other spectra to follow, the expansions of individual signals are shown so that the signal splitting patterns are recognizable.

The signal at 3.96 ppm, corresponding to the two Ha protons, is split into two peaks of equal height (and area) – this is referred to as a doublet. The Hb signal at 5.76 ppm, on the other hand, is split into three peaks, with the middle peak higher than the two outside peaks and the integration ratio between the three peaks is 1:2:1, such splitting signal is called a triplet.

Signal splitting is caused by spin-spin coupling, a term that describes the magnetic interactions between non-equivalent hydrogen atoms that are with 2 or 3 bonds of the hydrogens producing the signal. The nearby protons have magnetic moment that can be either against or with the external magnetic field, therefore splits the energy levels of the protons whose signal is being observed, and result in the splitting of the signal into multiple peaks (the terms ‘splitting’ and ‘coupling’ are often used interchangeably when discussing NMR).

The most typical coupling we observed in this course is from non-equivalent vicinal hydrogens that are 3 bonds away, that is the hydrogens on adjacent carbons. This is also called vicinal coupling or three-bond coupling.

A simple rule that applies for predicting the number of peaks (or splitting pattern) expected from coupling and the rule in 1H NMRis:

(n is the number of vicinal non-equivalent hydrogens)

We will exam the splitting pattern with different number of n: 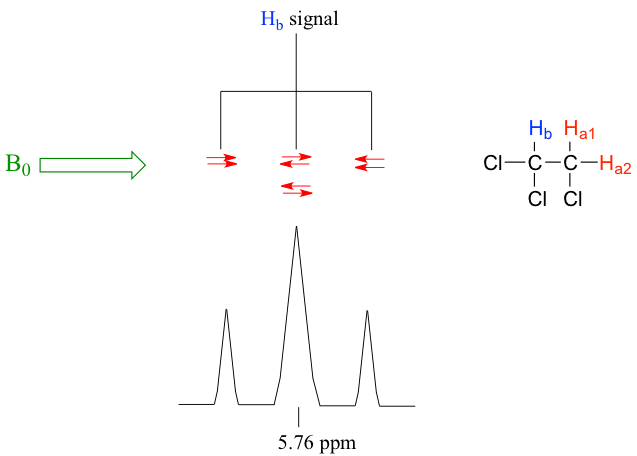 For the spectrum of ethyl acetate (Fig. 6.7e), the signal of Hb is a quartet, because there are three vicinal protons 3Hc on the adjacent carbon. Please note that the carbon with Hb connected with oxygen on the other side, and there are no hydrogen atoms on that oxygen atom, so only the coupling with three vicinal protons apply.

2. Protons in OH or NH generally do not couple with vicinal hydrogens. OH and NH protons are acidic enough to rapidly exchange between different molecules, so the neighboring protons never actually ‘feels’ their influence. See the specific example of 1-heptanol spectrum in Fig. 6.7g.

Signal assignment based on the given structure

With the structure of a compound given, we can apply all the knowledge about 1H NMR to assign the signals in the spectrum, that is to identify a certain signal comes from which hydrogen(s).

Match the 1H NMR spectrum below to its corresponding compound, and assign all of the signals. 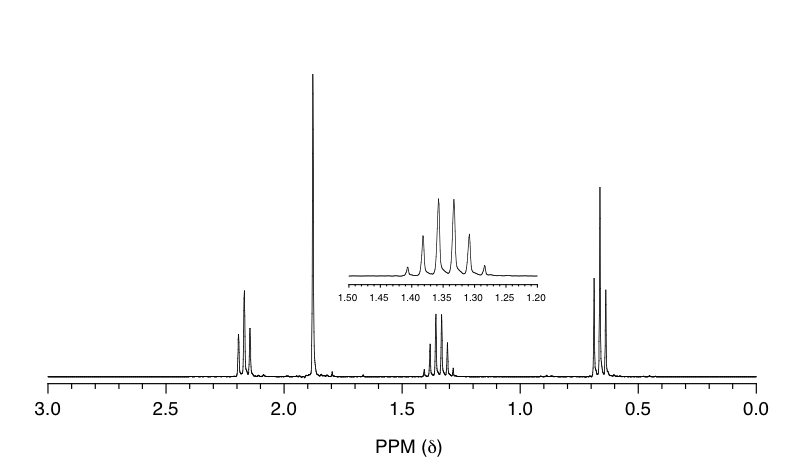 Approach: It is good idea to draw the structure of each compound and try to see which matches to the spectrum.

Solution: The spectrum is for 2-pentanone.

We’ll see examples for structure determination at the end of this chapter.