Similar to substitutions, some elimination reactions show first-order kinetics. These reactions go through E1 mechanism, that is the multiple-step mechanism includes the carbocation intermediate. 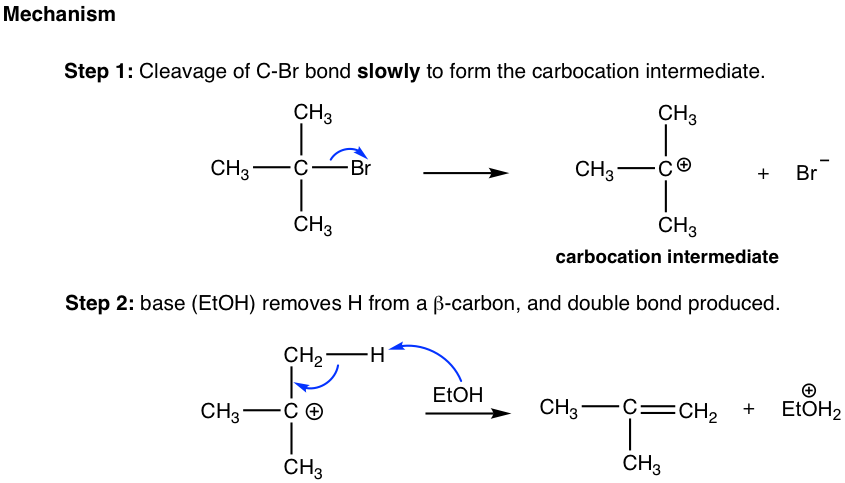 Step 1: The bromide dissociates and forms a tertiary (3°) carbocation. This is a slow bond-breaking step, it is also the rate-determining step for the whole reaction. Since only the bromide substrate involved in the rate-determining step, the reaction rate law is first order. That is the reaction rate only depends on the concentration of (CH3)3Br, and has nothing to do with the concentration of base, ethanol.

Step 2: The hydrogen on β-carbon (β-carbon is the one beside the positively charged carbon) is acidic because of the adjacent positive charge. The base, EtOH, reacts with the β-H by removing it, and the C-H bond electron pair moves in to form the C-C π bond.

The base ethanol in this reaction is a neutral molecule, and therefore a very weak base. Since strong base favors E2, so weak base is a good choice for E1, by discouraging from E2. Ethanol acts as the solvent as well, so E1 reaction is also the solvolysis reaction.

For E1 reaction, if more than one alkenes could be possibly formed as product, the major product will also be the more substituted alkene, like E2, because of the stability of those alkenes.