The two enantiomers are mirror images of each other. They are very alike and share many properties in common, like same b.p., m.p., density, color, solubility etc. In fact, the pair of enantiomers have the same physical properties except the way they interact with plane-polarized light.

When plan-polarized light interacts with chiral molecules, the plane of polarization will be rotated by the chiral substances. It was first discovered by Jean-Baptiste Biot in 1815 that some naturally occurring organic substances, like camphor, is able to rotate the plane of polarization of plane-polarized light. He also noted that some compounds rotated the plane clockwise and others counterclockwise. Further studies indicate that the rotation is caused by the chirality of substances.

The sample containing a chiral compound rotates the plane of polarization of plane-polarized light, the direction and angles of the rotation depends on the nature and concentration of the chiral substances. The rotation angles can be measured by using polarimeter (later in this section).

For a pair of enantiomers with same concentration, under the same condition, they rotate the plane of polarization with the same angles but in opposite direction, one is clockwise and the other is counterclockwise.

The enantiomer rotates the plane of polarization clockwise is said to be dextrorotatory (Latin, means to the right), and labelled with the prefix (d) or (+). The enantiomer rotates the plane of polarization counterclockwise is said to be levorotatory (Latin, means to the left), and labelled with the prefix (l) or (–). The d/l (or +/-) indicate the direction in which an optical active compound rotates the plane of polarization of plan-polarized light, that has to be determined by experiment to measure the optical rotation. d/l (or +/–) symbol has nothing to do with R/S. R/S indicates the arrangement of the groups around the chirality center, that can be determined by knowing the exact spatial arrangement of the groups. That means compound with R configuration can be either d or l, and compound with S configuration can also be either d or l. For the examples below, both compounds are S-isomer, but one is d (+) and the other is l (-).

The only thing we can be sure is that for a pair of enantiomers, if one enantiomer has been determined as d, then the other enantiomer must be l, and vice versa.

Since the measurement results vary with the wavelength of the light being used, the specific light from a sodium atomic spectrum with the wavelength of 589 nm, which is called the sodium D-line, is used for most polarimeter. The rotation degree measured by the polarimeter is called the observed rotation (α), and the observed rotation depends on the length of the sample tube, concentration of the sample and temperature.

To compare the optical rotation between different compounds under consistent conditions, the specific rotation

is used. Specific rotation is the rotation caused by a solution with concentration of 1.0 g/mL in a sample tube of 1.0 dm length. The temperature is usually at 20°C. Based on this definition, the specific rotation can be calculated from the observed rotation by applying the formula:

When a sample under measurement only contain one enantiomer, this sample is called as enantiomerically pure, means only one enantiomer is present in the sample.

We will use a series of hypothetic examples in next table for detailed explanation.

Sample #1 and #2 are straightforward.

In this sample of mixture, the rotation of the (-)-enantiomer is cancelled by the rotation caused by part of the (+)-enantiomer, so the overall net observed rotation depends on how much “net amount” of (+)-enantiomer present. This can be shown by the diagram below that helps to understand.

The observed rotation is in “-”, so (-)-enantiomer is in excess.

From here, we will see two ways of solving such type of question:

Other than optical activity difference, the different enantiomers of a chiral molecule usually show different properties when interacting with other chiral substances. This can be understood by using the analogue example of fitting a hand into the respective glove: right hand only fits into right glove, and it feels weird and uncomfortable if you wear left glove on the right hand. This is because both right hand and right glove are chiral. A chiral object only fit into a specific chiral environment.

In human body, the biological functions are modulated by a lot of enzymes and receptors. Enzymes and receptors are essentially proteins, and proteins are made up of amino acids. Amino acids are examples of naturally exist chiral substances. With the general formula given below, the carbon with amino (NH2) group is the chirality (asymmetric) center for most amino acids, and only one enantiomer (usually S-enantiomer) exist in nature. A few examples of amino acids are given below with the general formula.

Because amino acids are chiral, proteins are chiral so enzymes and receptors are chiral as well. The enzyme or receptor therefore form the chiral environment in human body that distinguish between R or S enantiomer. Such selectivity can be illustrated by the simple diagram below.

A couple of common examples to showcase such binding selectivity of different enantiomer may include limonene and carvone.

Limonene has two enantiomers, and they smell totally different to human being because they interact with different receptors that located on the nerve cells in nose. The (R)-(+)-limonene is responsible for the smell of orange, and the (S)-(-)-limonene gives the bit smell of lemon.

If you like caraway bread, that is due to the (S)-(+)-carvone; and the (R)-(-)-carvone that is found in spearmint oil gives much different odor. 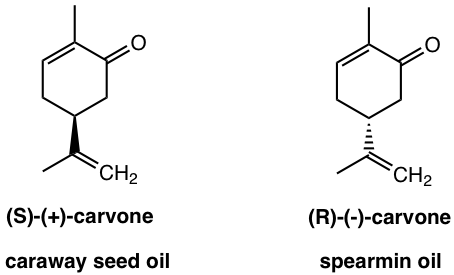 The issue of chiral drugs (the drug contain a single enantiomer, not as a racemate) was not in the attention of drug discovery industry until 1960. Back then, drugs were approved in racemate form if a chirality center involved, and there was no further study about biological difference on different enantiomers. These were all changed by the tragic incident of thalidomide. Thalidomide was a drug that was sold in more than 40 countries, mainly in Europe, in early 1960s as a sleeping aid and to pregnant women as antiemetic (drug that preventing vomiting) to combat morning sickness. It was not recognized at that time that only the R-enantiomer has the property, while the S-enantiomer was a teratogen that causes congenital deformations. The drug was marketed as a racemic mixture and caused about 10,000 children had been damaged until it was withdrawn from the market in Nov. 1961. This drug was not approved in US however, attributed to Dr. Frances O. Kelsey, who was a physician for the FDA (Food and Drug Administration) at that time and had insisted on addition tests on some side effects. Thousands of life were saved by Dr. Kelsey, and she was awarded the President’s medal in 1962 for preventing the sale of thalidomide.