Let’s still take the reaction between CH3Br and OH– as the example for SN2 mechanism.

SN2 mechanism involves two electron pair transfers that occur at the same time, nucleophile attacking (red arrow) and leave group leaving (blue arrow). The nucleophile OH– approaches the electrophilic carbon from the back side, the side that is opposite to the direction that leaving group Br leaves. With the nucleophile OH– getting closer, the Br start to leave as well. The new C—OH bond formation and the old C—Br bond breaking occur at the same time. In a very short transient moment, the carbon atom is partially connected with both OH and Br, that gives a highest energy level state of the whole process called transition state. In the transition state of SN2 reaction, there are five groups around the carbon and the carbon can be called “pentacoordinated”. As the OH– continues to get closer to the carbon, the Br moves further away from it with the bonding electron pair.  Eventually, the new bond is completely formed and the old bond is completely broken that gives the product CH3OH.

In the mechanism, the reaction proceeds in a single step that involves both nucleophile and the substrate, so increasing the concentration of either of them makes the possibility of collision increase, that explains the second-order kinetics of SN2 reaction. With both nucleophile attacking and leaving group leaving happen at the same time, SN2 is also said to be a concerted mechanism, concerted means simultaneous.

The energy changes for the above reaction can be represented in the energy diagram shown in Fig. 7.1. SN2 is a single-step reaction, so the diagram has only one curve. The products CH3OH and Br– are in lower energy than the reactants CH3Br and OH–, indicates that the overall reaction is exothermic and the products are more stable. 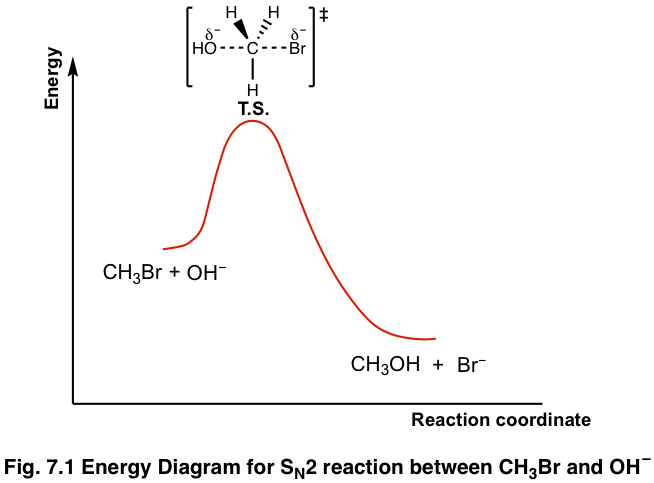 The Effect of Alkyl Halide Structure on SN2 Reaction Rate

As shown in Table 7.1, methyl and primary halides are the substrates with the highest rate, the rate decreases a lot for secondary halides, and the tertiary halides do not undergo SN2 reaction at all because the rate is too low to be practical.

The relative reactivity of alkyl halides towards SN2 reaction can therefore be summarized as:

Why the trend is like this? This can be explained by the mechanism of SN2 reaction. Actually this is one of the experiment evidences scientists based on for proposing the mechanism. A key feature in SN2 mechanism is that the nucleophile attacks from the back side. When nucleophile approaching to the carbon, it is easiest to getting close to the methyl carbon because the hydrogen atoms connected on carbon are small in size. With the size of the groups connected on the carbon getting larger, it is becoming more difficult to access to the carbon, and such approaching is totally blocked for tertiary carbon with three bulky alkyl groups connected. Therefore, the reactivity difference is essentially caused by the steric effect. Steric effect is the effect that based on the steric size or volume of a group. Because of the steric hinderance of bulky groups on the electrophilic carbon, it is less accessible for nucleophile to do back-side attack, so the SN2 reaction rate of secondary (2°) and tertiary (3°) substrates decreases dramatically. Actually the 3° substrates never go with SN2 reaction mechanism because the reaction rate too slow.

The Stereochemistry of SN2 Reaction

Another feature of SN2 reaction mechanism is that the overall configuration of the carbon in the product get inverted comparing to that of the reactant, like an umbrella flipped inside out. Such inversion of configuration is called Walden inversion. let’s see what is the stereochemistry consequence for such inversion.

Start with the (R)-2-bromobutane, the SN2 reaction produces only one enantiomer of 2-butanol product, and it is predictable that the configuration of the product supposed to be S because of the configuration inversion.

Show the product of the following SN2 reaction (CN– is the nucleophile):