Addition reaction also occur easily between halogens (Br2 and Cl2) and alkenes. In the presence of aprotic solvent, the product is a vicinal dihalide, as shown here for the addition of chlorine to propene.

The reaction between C=C double bond and bromine (Br2) can be used as a test for the presence of alkene in an unknown sample. The bromine reagent is in reddish color, and the product vicinal dibromide is colorless. When bromine is added to the sample, if the reddish color disappear, that means the sample does contain an alkene. The addition reaction occurs to get reddish bromine consumed and colorless product formed, so color fades off.

Mechanism for the Addition of Halogen to Alkenes

The products for addition of halogen to alkenes seems straightforward, with each halogen added to each double bond carbon. However, the addition proceeds with unique stereochemistry feature that need special attention. It turns out that the halogen atoms are added via anti addition to the double bond, as examples shown here:

The mechanism that accounts for the anti addition of halogen involves the electron pairs transferred in a way that is different to what we are familiar with, and the formation of the cyclic halonium ion intermediate. We will take the addition of bromine to (E)-2-butene as example to explain the mechanism.

In the second step, the nucleophilic bromide, Br– (generated in step 1), attacks the carbon of the cyclic intermediate. Since the bottom side of the intermediate is blocked by the ring, the Br– can only attack from the top side, that results in the anti position of the two Br in the product. The attack is similar to SN2 reaction and cause the ring to open and the formation of vicinal dibromide. For the above example, the two carbons in the bromonium ion intermediate are in same chemical environment, so they both have the same chance to be attacked by Br–, as shown in blue and red arrows. The two attacks result in the same product, the meso compound (2R,3S)-2,3-dibromobutane, in this reaction.

Next, let’s exam the addition of bromine to (Z)-2-butene. As you may expect, the reaction goes through the same mechanism that involves the cyclic bromonium ion intermediate, however the products have different stereochemistry features.

In the addition of Br2 to (Z)-2-butene, the attack of Br– to either carbon in bromonium ion by following blue or red arrow results in different enantiomer (step 2 in above mechanism). Since both carbons have the same chance to be attacked, so the product is the 50:50 racemic mixture of the two enantiomer.

Show the product of following addition.

The formation of the racemic mixture product can be explained by the mechanism: 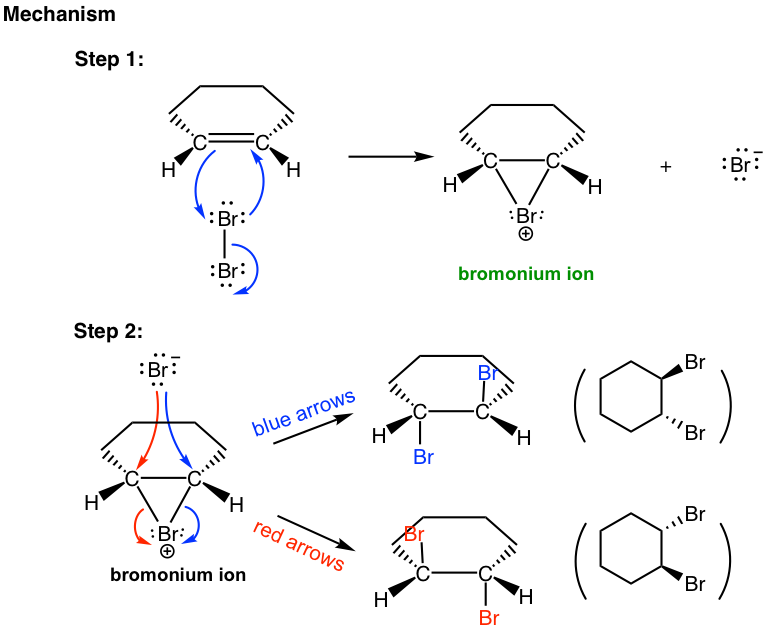 If water is used as a solvent in the reaction, rather than CH2Cl2, then water takes in part of the reaction and acts as nucleophile to attack the cyclic halonium intermediate in the second step. The major product of the addition will be a vicinal halohydrin as a result. A vicinal halohydrin is the compound that contains a halogen and an OH group on two adjacent carbons.

In second step of the mechanism, both H2O (solvent) and Br– (produced in the first step) are nucleophiles and have chance to react with the cyclic bromonium ion. However since H2O is the solvent, its concentration is much higher than that of Br–, so the major products come from the attack of H2O.

This reaction is still the stereospecific reaction in which the anti addition occurs, that the halogen and OH group are in anti position. For above example, the addition of bromine water to cyclohexene, the racemic mixture with both enantiomers are obtained.

If the alkene is not in symmetric structure, it is observed that the addition shows the regioselectivity as well, specifically the halogen adds on the carbon atom with greater number of hydrogen atoms, and OH group ends up on the double bond carbon with less amount of hydrogen atoms. How to explain this? 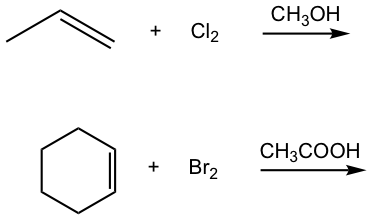