In the discussions about 1,2-dimethylcyclohexane in Chapter 4, we have learned that there are two geometric isomers possible for that compound, that are cis and trans. The restricted C-C bond rotation of cyclic structure result in the cis or trans isomer of 1,2-dimethylcyclohexane. Restricted rotation also can be caused by a double bond, so  geometric isomers apply to some alkenes as well.

For the example of 2-butene, the condensed structural formula CH3-CH=CH-CH3 does not really represent the trigonal planar shape of the sp2 carbons with double bonds. To show the shape explicitly, we need to draw the Kekulé structure that show all the bond angles. Then it will be noticed that there are two different shapes of 2-butene, with the CH3 groups on either the same side or opposite side of the double bond.

To do the E/Z designation, at first, the groups connected on each sp2 double bond carbon will be assigned the priority based on the atomic number (see following guidelines for details), then the isomer with same priority group on the same side of double bond is assigned as “Z”, and the isomer with the same priority group on the opposite side of double  bond is called “E”. Both E and Z come from German, “Zusammen” means same side and “Entgegen” means opposite.

The guidelines for assigning group priority in E/Z naming system

1. Priority is assigned based on the atomic number of the atoms bonded directly to the sp2 double bond carbon, the larger the atomic number, the higher the priority (isotopes with higher mass number has higher priority). For example: S > O > N > C > H.

2. If the two groups bonded directly on an sp2 carbon start with the same atom, means there is a tie from step 1, then we move on to the atoms that connected to the “tied” atom, priority increases as the atomic number of the next attached atom increases.

For the above structure, it is obvious that Cl is higher than C (C of CH2CH3 group) on the right side sp2 carbon.

On the left side sp2 carbon, we need to compare between methyl CH3 group and ethyl CH2CH3 group. Both groups has carbon atom attached directly on the sp2 carbon, that is a tie. In CH3 group, the carbon atom is bonded to H, H, H; while in CH2CH3 group, the carbon atom is bonded with H, H, C. So ethyl CH2CH3 is higher than methyl CH3 (see Note below). With higher priority group on opposite side of the double bond, this is the E isomer, the complete name of the compound is: (E)-3-chloro-4-methyl-3-hexene.

Note #2: The above compound is cis-isomer if using the cis/trans naming system (both ethyl group are on the same side of double bond), but is E-isomer for E/Z system. So the cis/trans and E/Z are two different naming systems, don’t always match.

3. Repeat step 2 if necessary, until the priority is assigned.

The answer is B.

Order the following groups based on decreasing priority for E/Z naming purpose. 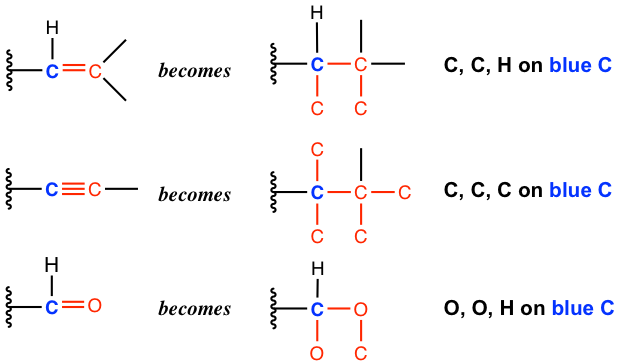