Since 1,3-diaxal interaction is essentially the steric strain, so the larger the size of the substituent, the greater the interaction is. For t-butylcyclohexane, the conformation with the t-butyl group in the equatorial position is about 21 kJ/mol more stable than the axial conformation. 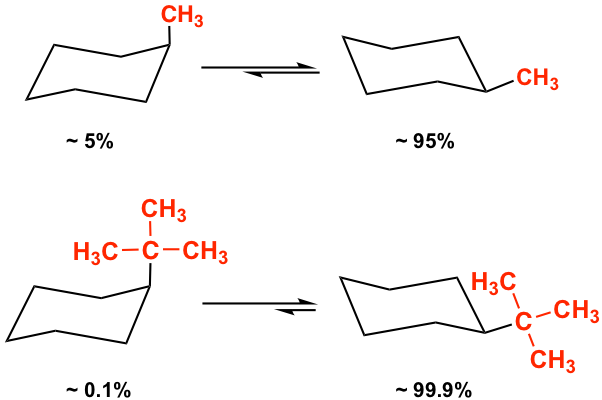 When there are two substituents on different carbons of a cycloalkane, there are two possible relative position between the two groups, they can be either on the same side, or opposite side, of the ring, that are called geometric isomers, a type of stereoisomers (more discussions in Chapter 5). The isomer with two groups on the same side of the ring is the “cis” isomer, and the one with two groups on opposite side is called the “trans” isomer. Because the C-C bond can not rotate freely due to the restriction of the ring, the two geometric isomers can not be interconverted.

So now when considering about the conformational isomer, the stereoisomers should be taken into account as well. The general guideline for determining the relative stability of conformers for a certain isomer is:

Let us start with cis-1,2-dimethylcyclohexane, and compare between the two possible chair conformations:

For both conformations, there is one methyl group in equatorial and the other methyl group in axial, so the two conformers are equivalent, have same energy and stability level.

How to tell a isomer in chair conformation is cis or trans? A general way to recognize is to check that whether a group attached by the bond is above the ring (↑, point up), or below the ring (↓, point down). If both groups point to the same side, the compound is cis isomer; otherwise it is trans isomer.

How about the trans-1,2-dimethylcyclohexane? There are also two possible chair conformations:

cis-1-fluoro-4-isopropylcyclohexane is the structure with two different substituents. Both chair conformations have one axial substituent, and one equatorial substituent. According to the guideline, the conformer with larger substituent in equatorial is more stable because if the large group is axial, stronger steric strain will be generated and it is less stable.

Tips: draw all the chair conformers of each isomer, and decide which is the most stable one.