We have learned that different functional groups have different strengths in terms of acidity. In this section, we will gain an understanding of the fundamental reasons behind this, which is why one group is more acidic than the other one. Many of the concepts that we will learn here will continue to apply throughout this course as we tackle many other organic topics.

The element effect is about the individual atom that connects with the hydrogen (keep in mind that the acidity is about the ability to donate a certain hydrogen). Let’s compare the acidity of hydrogens in ethane, methylamine and ethanol as shown below. 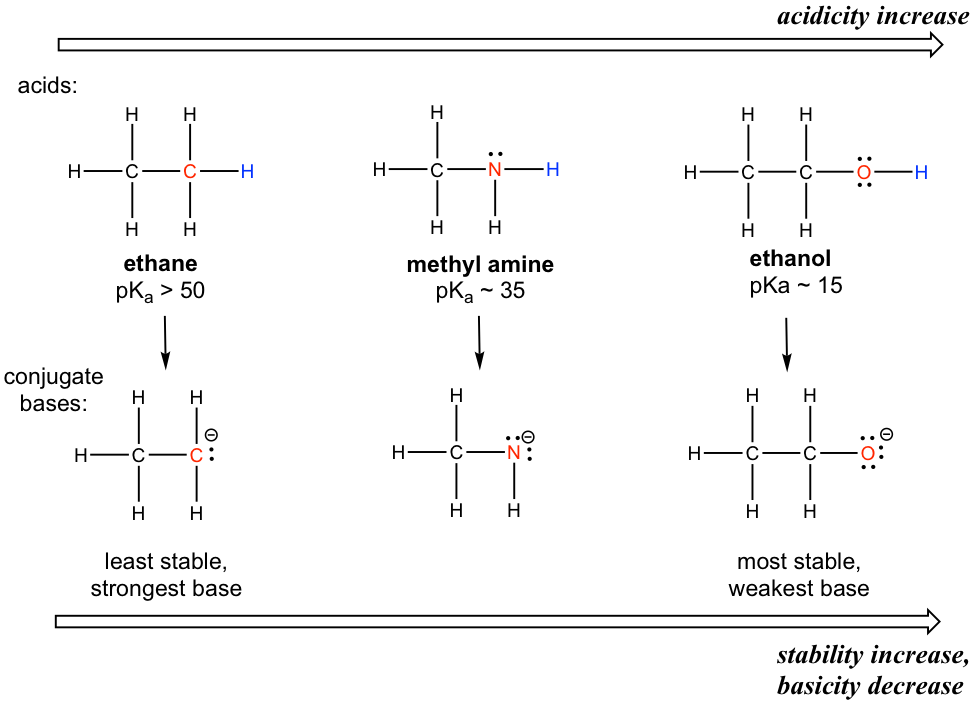 The relative acidity of elements in the same period is:

For elements in the same period, the more electronegative an atom, the stronger the acid is; the acidity increases from left to right across the period.

B. Group (vertical) Trend: Size of the atom

The acidity of the H in thiol SH group is also stronger than the corresponding alcohol OH group, following the same trend. For example, the pKa of CH3CH2SH is ~10, which is much more acidic than ethanol CH3CH2OH with a pKa of ~16.

In order to make sense of this trend, we will once again consider the stability of the conjugate bases. When moving vertically in the same group of the periodic table, the size of the atom overrides its electronegativity with regards to basicity. The atomic radius of iodine is approximately twice that of fluorine, so in an iodide ion, the negative charge is spread out over a significantly larger volume, so I– is more stable and less basic, making HI more acidic.

The relative acidity of elements in the same group is:

For elements in the same group, the larger the size of the atom, the stronger the acid is; the acidity increases from top to bottom along the group. 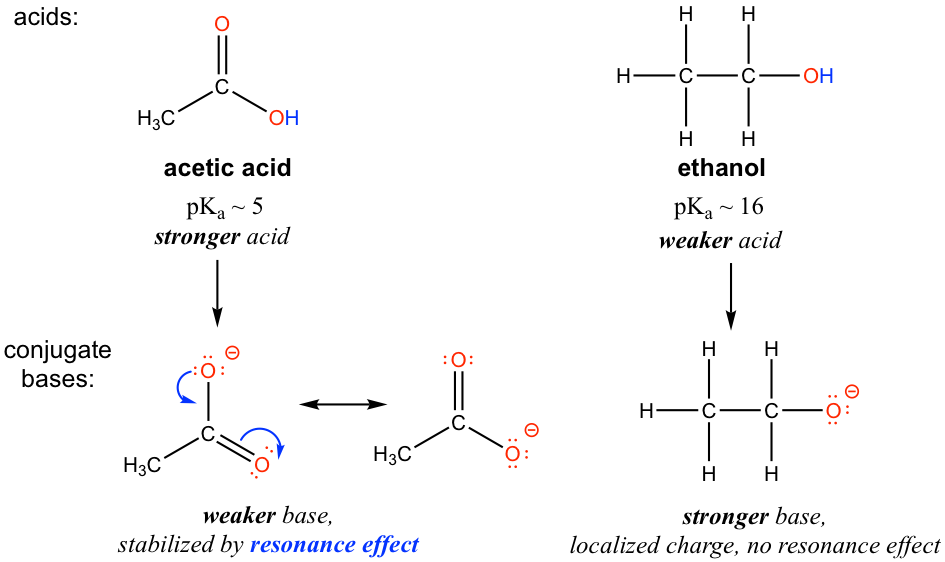 The charge delocalization by resonance has a very powerful effect on the reactivity of organic molecules, enough to account for the big difference of over 10 pKa units between ethanol and acetic acid. Because pKa = –log Ka, that means that there is a factor of about 1010 between the Ka values for the two molecules!

The pKa of the OH group in alcohol is about 15, however OH in phenol (OH group connected on a benzene ring) has a pKa of about 10, which is much stronger in acidity than other alcohols. Explain the difference.

Let’s compare the pKa values of acetic acid and its mono-, di-, and tri-chlorinated derivatives:

The presence of the chlorine atoms clearly increases the acidity of the carboxylic acid group, and the argument here apparently does not have to do with the element effect. The resonance effect does not have to do with it either, because no additional resonance contributors can be drawn for the chlorinated molecules. Rather, the explanation for this phenomenon involves something called the inductive effect.  A chlorine atom is more electronegative than hydrogen, and is thus able to ‘induce’, or ‘pull’ electron density towards itself via σ bonds in between, and therefore helps to spread out the electron density of the conjugate base, the carboxylate, and stabilize it. The chlorine substituent can be referred to as an electron-withdrawing group because of the inductive effect.

In addition, because the inductive effect takes place through covalent bonds, its influence decreases significantly with distance — thus a chlorine that is two carbons away from a carboxylic acid group has a weaker effect compared to a chlorine just one carbon away.

To introduce the hybridization effect, we will take a look at the acidity difference between alkane, alkene and alkyne. 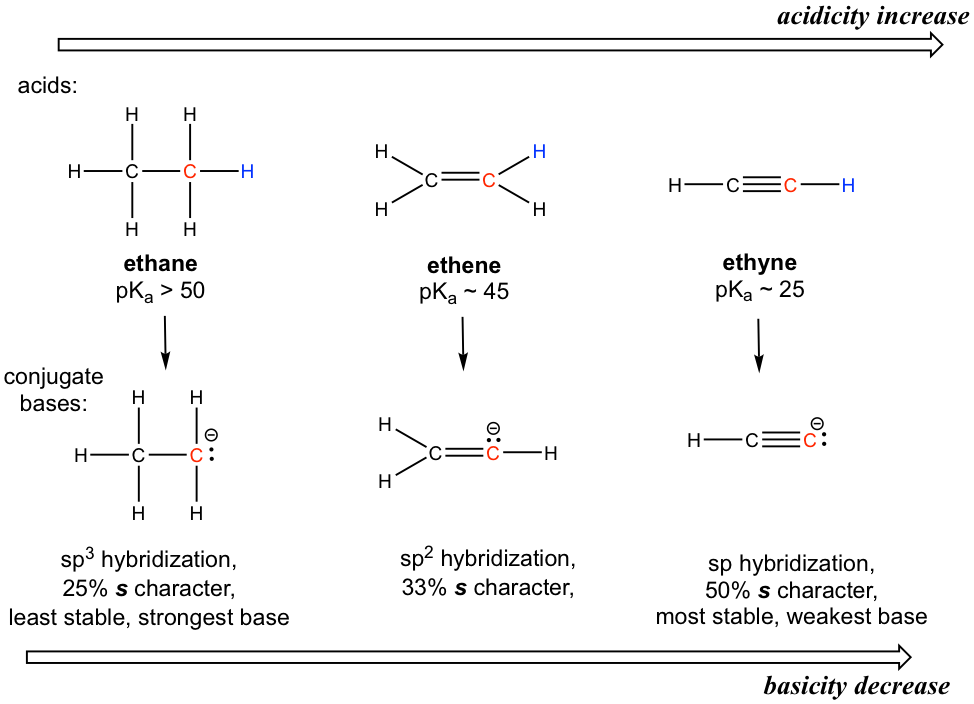 The hydrogen atom is bonded with a carbon atom in all the three functional groups, so the element effect does not invoke. Also considering about the conjugate base of each, there is no extra resonance contributor possible.

The relative stability of the three anions (conjugate bases) can also be illustrated by the electrostatic potential map, in which the lighter color (less red) indicate less electron-density of the anion, and the higher stability.