In this reaction, the Br in the reactant methylbromide (CH3Br) is replaced by the OH group, and the methanol (CH3OH) is produced as the major product, together with bromide Br-, the side product. It is easy to understand that this is a substitution reaction, because Br is substituted by OH.

Further discussions on this simple reaction require the introduction of some key terms that are critical in understanding why and how the reaction proceed in this way. These terms are electrophile, nucleophile and leaving group.

For CH3Br in this reaction, it is the carbon atom that act as the electrophile, and the carbon can be called as electrophilic carbon.

The compound CH3Br that undergoes the substitution usually can be called the substrate.
Nucleophile

The hydroxide, OH–, is another reactant in above reaction. It is shown clearly with the Lewis structure of OH– that the oxygen atom has three lone pair electrons and is negatively charged, so it is an electron-rich species with high electron density.

An electron-rich species is called a nucleophile (“nucleo” comes from nucleus, that means positive charge), that is the reagent seeking positively charged or electron-poor species to react with. OH– is the nucleophile for above reaction. Generally, any species with the electron pair available for sharing could be nucleophile. Nucleophile can be either negatively charged (Nu:–), or neutral (Nu:), for example: OR–, H2O, ROH, NH3, RNH2, RCOO– are all possible nucleophiles.

Note: the nucleophile and leaving group are not necessary negatively charged, they could be neutral as mentioned earlier.

Kinetics is the study that concerns the rate of a chemical reaction, or how fast the reaction occurs. The reaction rate data helps to shine a light on the understanding of reaction mechanism, the step-by-step electron transfer process. Kinetic studies on nucleophilic substitution reactions indicate that there are two different rate law expressions for such reactions. For the two reactions below, reaction 1 is in second order while reaction 2 is in first order. The only reason behind the different kinetic rate is that the reactions go through different reaction mechanism.

Reaction 2 is another substitution reaction example. The substrate here is a tertiary bromide and the nucleophile is neutral water molecule. As a first-order reaction, the reaction rate depends only on the concentration of substrate (CH3)3CBr and has nothing to do with nucleophile. 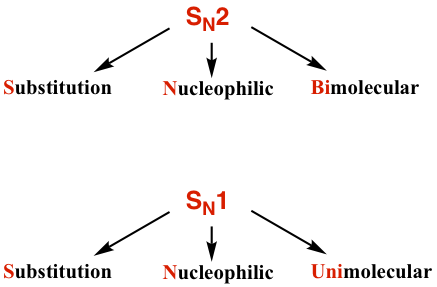 We will have detailed discussions on SN2 and SN1 mechanism respectively, and then compare the similarities and differences in between.