Other than geometric isomers, there is another type of stereoisomer that is related to a special property called chirality. We will start with the basic concepts of chirality, then expand the topic further from there.

To talk about chirality, let’s first take a closer look at our hands, left hand and right hand. The left hand can be regarded as the mirror image of the right hand, and vice versa. Now let’s try to superimpose (overlay) the left hand on right hand, can you do that?

No! No matter how hard you try, the left hand can not be superimposed on the right hand. This is because of the special property of hand, that is called chirality. Both left and right hand are chiral (ky-ral), and show chirality. Chiral derived from the Greek word cheir, that means “hand”, and chirality means “handedness”.

The definition of the chirality is the property of any object (molecule) of being non-superimposable on its mirror image. The left and right hand are mirror image to each other, and they are not superimposable, so both left hand and right hand are chiral. Other than that, you can also find lots other objects in daily life that show chirality as well.

In organic chemistry, we are interested in organic molecules that are chiral. Let’s see the following molecular models that represent a molecule and its mirror image.

In the models here, the four balls with different colors represent four different substituents, and the two structures are mirror image to each other. The effort of trying to superimpose one structure to the other does not work. Therefore, according to the definition of chiral/chirality, both molecules are non-superimposable on the mirror image, so they both chiral and show chirality.

It is highly recommended that the molecular model set is used as learning tool in this chapter. Assemble the model as shown above to understand the concept of chiral and chirality. The model is also very useful for the R/S assignment later in this section.

As a summary, a chirality (asymmetric) center should meet two requirements:

For following compounds, label each of the chirality center with a star.

2.  Label all the chirality centers in the following molecules.

5.3.2 Stereoisomer with One Chirality Center — Enantiomers

For 2-butanol, we are able to recognize that C2 is the chirality center. 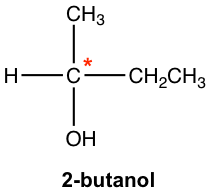 The perspective formula show the 3D structure of 2-butanol in two different ways, and they are non-superimposable mirror images to each other.

The two mirror images are different molecules. They have the  same bonding, but differ in the way that the atoms arranged in space. So the two molecules are stereoisomers. This specific type of stereoisomer here is defined as enantiomers. Molecules that are a pair of non-superimposable mirror images of each other are called enantiomers.

To draw the 3D structure of any enantiomer, we need to use perspective formula with solid and dashed wedges to show the tetrahedral arrangements of groups around the sp3 carbon (refer to section 2.11). Out of the four bonds on tetrahedral carbon, two bonds lie within the paper plane are shown as ordinary lines, the solid wedge represent a bond that point out of the paper plane, and the dashed wedge represent a bond that point behind the paper plane. For the first enantiomer, you can draw the four groups with any arrangement, then draw the other enantiomer by drawing the mirror image of the first one. Please note, although it seems there are different ways to show the enantiomers, there are only total two enantiomers, we will learn in next section how to identify and designate each of them.

Several possible ways to show the structures are included in the answer here. However, your answer can be different to any of them, as long as a pair of mirror images are shown.

Draw the pair of enantiomers of 2-chloro-1-propanol.

The two enantiomers are different compounds, although they are very similar. Therefore we need a nomenclature system to distinguish between them, to give each one a different designation so that we know which one we are talking about. That is the R/S naming system defined in IUPAC. The R/S designation can be determined by following the Cahn-Ingold-Prelog rule, the rule devised by R. S Cahn, C. Ingold and V. Prelog.

Let’s take the following molecule as an example to practice the rule:

Step 1: The priorities are assigned.

Step 2: Re-orient the molecule, so H (#4, lowest priority) is on the position away from us. Then the other three groups will be arranged in this way:

Step 3: Go along the direction from #1→#2→#3, it is in the clockwise direction, so this enantiomer is assigned R configuration, and the complete name of the molecule is (R)-1-chloroethanol.

Now let’s assign the configuration of the other enantiomer:

Following the same steps, put H away from us, and the arrangement of the other three groups is:

The counterclockwise direction gives the S configuration, and the complete name of the molecule is (S)-1-chloroethanol.

For the perspective formula of enantiomers, it is important to know the following properties: 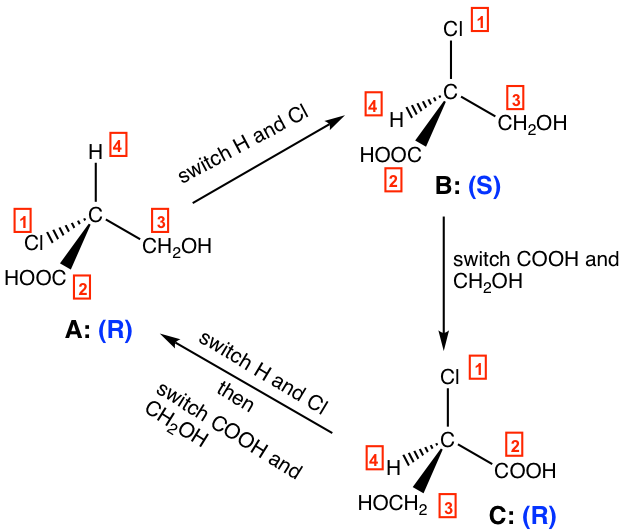 For the structures above:

When you switch between a pair of groups, do it with cautions. Do not switch unless it is really necessary because it is quite easy to get lost. Do R/S assignment is a safer (and easier for most cases) way to compare the relationship between two structures.

Determine the R/S configuration of the chirality center in following compounds.

Determine the relationship for each pair of molecules: enantiomers, identical, constitutional isomers, non-isomer: