Alkenes undergo a large variety of reactions. At first glance, these reactions appear to be quite different, however detailed studies indicated that the different mechanism all share some common features. The double bond is the reactivity center of alkene, this is mainly because of the relatively loosely held π electrons of the double bond. The π bond is formed by side-by-side overlapping, the relative weak overlapping mode, so π bond is weak and exhibits high reactivity. The π electrons also make the double bond carbons electron-rich, and have the tendency to be attracted to an electrophile. The high reactivity make alkenes an important type of organic compounds, and they can be used to the synthesis a wide variety of other compounds, such as halide, alcohol, ethers, alkanes.

The most common type of reaction for alkene is the addition reaction to C=C double bond. In addition reaction, a small molecule is added to multiple bond and one π bond is converted to two σ bonds (unsaturation degree  decreases) as a result of addition. Addition reaction is the opposite process to elimination.

The addition reactions can generally be categorized depends on what small molecule added, our following discussions will also be based that.

10.2.1 Addition of Hydrogen Halide to Alkenes

The addition reaction of a hydrogen halide to an alkene produces an alkyl halide as product. For examples:

In above reactions, the alkenes are in symmetric structures, that means it does not matter which carbon boned with hydrogen and which carbon bonded the halogen, the same product will be obtained in either way.

For the alkene that does not have the symmetric structure, the double bond carbons have different substituents, then the question of which carbon get the hydrogen is very critical. For the example of following reaction, two possible products could be produced, 2-bromo-2-methylpropane and 1-bromo-2-methylpropane, which one is actually formed? Or are both formed?

It turns out that 2-bromo-2-methylpropane is the main product for the reaction. To explain and understand the outcome of the reaction, we need to look at the mechanism of the reaction as we always do.

The mechanism of the addition reaction involves two steps (shown below). In first step, the π electrons of the alkene act as nucleophile and are attracted to the partially positively charged hydrogen (electrophile) of HBr. As the π electrons of the alkenes moving toward the hydrogen, the H-Br bond breaks, with Br moves away with the bonding electrons, and a new σ bond formed between one double bond carbon and hydrogen. A carbocation and a bromide, Br–, are formed this step.

When the new sbond formed between double bond carbon and hydrogen in first step, the hydrogen could possibly be bonded with either carbon, as shown in path (a) and (b), and the carbocations with different structure will be produced. It is obvious to tell that the tertiary carbocation formed in path (a) is much more stable than the primary carbocation in path (b), and will be produced preferably. The tertiary carbocation is then attacked by the Br– in the second step, that produces the product 2-bromo-2-methylpropane. It is the stability difference between two carbocations in the first step that accounts the selective formation of 2-bromo-2-methylpropane of the overall reaction.

The two possible products of this reaction are constitutional isomers to each other. For the reaction in which two or more constitutional isomers could be obtained as products, but one of them predominates, the reaction is said to be a regioselective reaction. Regio comes from Latin word regionem that means direction. The regioselectivity trend of the electrophilic addition of HX to alkenes had been summarized as Markovnikov’s rule by Russian chemist Vladimir Markovnikov. One way to state Markovnikov’s rule is that in the addition of HX to an alkene, the hydrogen atom adds to the double bond carbon that has greater number of hydrogen atoms.

The underlying reasoning for Markovnikov’s rule is the stability of carbocation intermediate that involved in reaction mechanism. It seems easy for you to just memorize the rule or just memorize the fact that 2-bromo-2-methylpropane is the product for above reaction, without understanding why. However, you will notice soon that your memorization will be overwhelmed and mixed up with many more reactions coming up. The proper way to study organic reactions is to learn and understand the mechanism, unify the principles of reactions based on mechanism. The mastery of the contents will much easier and a lot more fun in this way, rather than trying to memorize tons of reactions.

Show structure of the major product for following addition reactions. 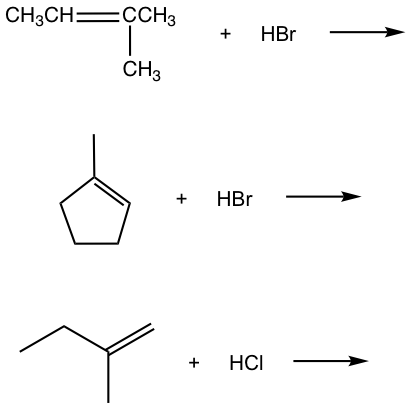 For the addition of HBr to 3-methyl-1-butene, two products were observed. Show the reaction mechanism to explain the formation of both products.

10.2.2 Radical Addition of HBr to Alkenes

In last section we learned that the electrophilic addition of HX to alkene gives addition products that follow Markovnikov’s rule. Here we will learn that the hydrobromide, HBr, can also add to alkene in a way that gives anti-Markovnikov product.

The anti-Markovnikov product are obtained through different mechanism, that is the radical mechanism. To initiate radical mechanism, peroxide must be involved in order to generate the radical in the initiation step of the mechanism. The O-O bond of peroxide is weak (with bond energy of about 150 kJ/mol), and it undergoes the homolytic cleavage readily with heat to produce alkoxyl radicals. The peroxide therefore acts as radical initiator by generating radicals, and the addition is called radical addition. The detailed radical addition mechanism of the above addition of HBr to 2-methylpropene is given here.

The initiation involves two steps for the radical addition mechanism. The alkoxyl radical generated in step 1 reacts with H-Br to generate bromine radical, Br·, that reacts with alkene to initiate the chain reaction in propagation steps. It shown clearly in the propagation steps that the order of the addition is reversed in radical addition comparing to that of electrophilic addition. Specifically, the bromine radical (Br) is added to the double bond first followed by the abstraction of hydrogen atom (H), therefore the anti-Markovnikov product is produced as a result.

One more note is that only HBr proceed with radical addition in the presence of peroxide, not HCl or HI.