Relationship violence is any form of physical, emotional, spiritual and financial abuse, negative social control or coercion that is suffered by anyone that has a bond or relationship with the offender. In the literature, we find words such as intimate partner violence (IPV), neglect, dating violence, family violence, battery, child neglect, child abuse, bullying, seniors or elder abuse, male violence, stalking, cyberbullying, strangulation, technology-facilitated coercive control, honour killing, female genital mutilation gang violence and workplace violence. In couples, violence can be perpetrated by women and men in opposite-sex relationships (Carney et al., 2007), within same-sex relationships (Rollè et al., 2018) and in relationships where the victim is LGBTQ2SAI+ (lesbian, gay, bisexual, transgender, queer, Two-Spirit, intersex and asexual plus)  (The Scottish Trans Alliance, 2010; Rollè et al., 2018). Relationship violence is a result of multiple impacts such as taken for granted inequalities, policies and practices that accept sexism, racism, ageism, xenophobia and homophobia. It can span the entire age spectrum. It may start in-utero and end with death. This chapter is committed to the people to who’s land we have immigrated to, Indigenous communities. Many of them suffer generational trauma and are at higher risk than the mainstream Canadian.

…harm did not end when they walked out the school doors for the last time. Rather, Indigenous societies and families continued to face trauma for generations after, trauma from which we are all still struggling to heal. Unfortunately, one of the lasting legacies is an alarmingly high rate of violence against Indigenous women and girls (Chief Wilton Littlechild in Mckay & Cree, n.d., p. 11).

It is important to keep in mind other experiences endured by Indigenous communities in Canada that impact relationships and can create both individual and community trauma. For example, the statistics for MMIWG (murdered and missing Indigenous women and girls) are shocking, with Indigenous women and girls twelve times more likely to be murdered and/or missing than any other group in Canada (The National Inquiry into Missing and Murdered Indigenous Women and Girls, 2019). In addition, Indigenous children are apprehended by government authorities and placed in child welfare services at disproportionate rates (Canadian Domestic Homicide Prevention Initiative, 2018, p. 7), sometimes for reasons related to intergenerational trauma.

The Truth and Reconciliation Commission (TRC, 2015) captured the traumatic experiences Indigenous communities had to endure in the hands of the colonizers. This report also outlined how colonizers systematically and forcefully took Indigenous children away from their parents and communities and placed them in residential schools. Here, they were forced to learn the language and culture of the colonizers. Many children endured physical, sexual and emotional abuse and neglect in the residential schools. The disconnection from their families, communities and culture had a long-term negative effect on many. While there has been some progress in ensuring more culturally sensitive supports and services, according to a 2016 Canadian Human Rights Tribunal decision, there remains systemic discrimination against Indigenous people, for instance, the Canadian government has underfunded children and families on reserves compared to ministries of children and families in other jurisdictions. The long-lasting underfunding may have been a contributor to ongoing neglect and abuse among Indigenous communities which can also lead to intergenerational trauma. See video on intergenerational trauma (Historica Canada, 2020). Figure 19.1 shows the trajectory of health and social challenges when generational trauma such as residential schools is passed on at conception. It leads to multiple conditions such as adverse childhood experiences, disrupted neurodevelopment, social, emotional and cognitive impairment, risky health behavior and chronic health conditions including RV and early death. 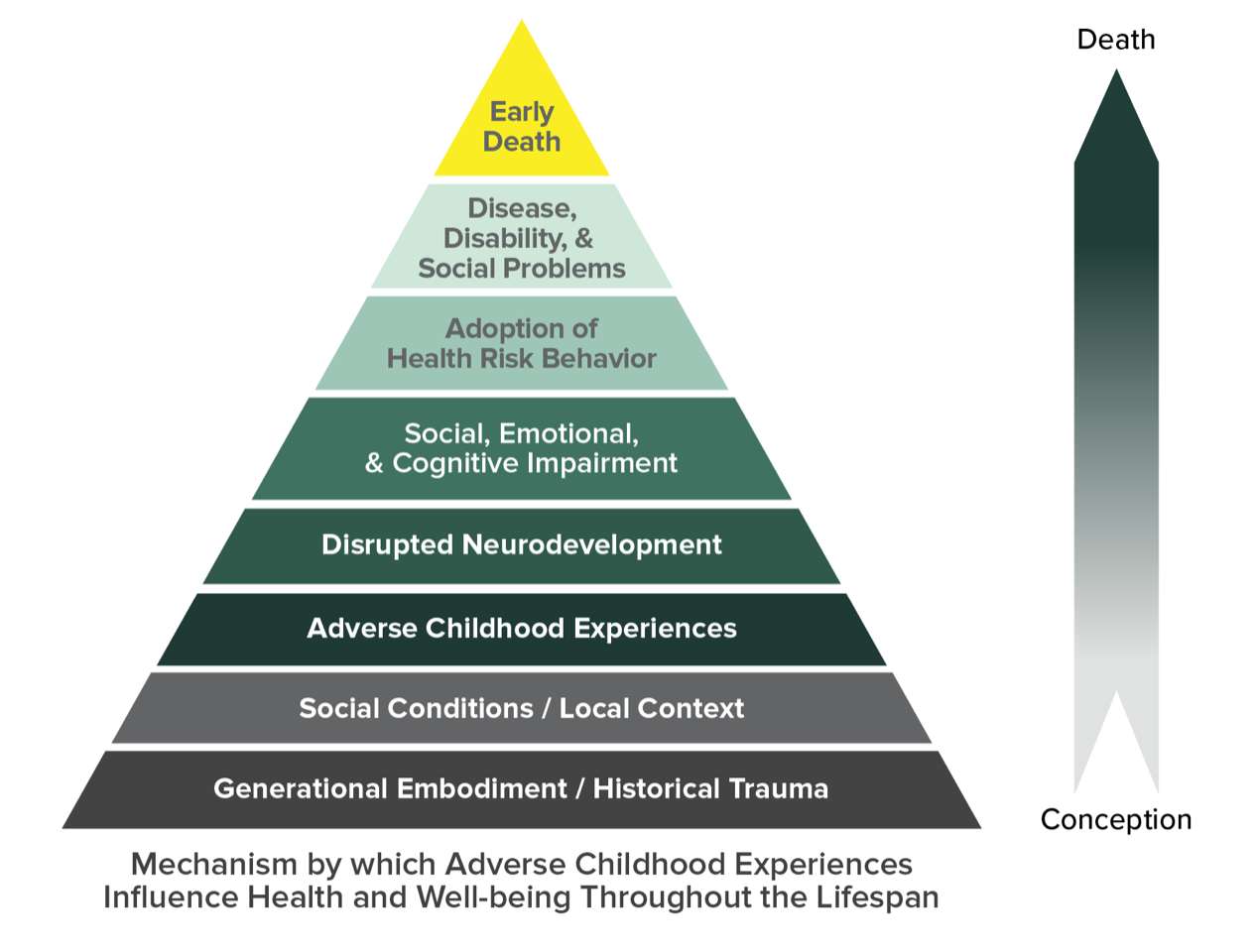 Intergenerational trauma can result in:

Indigenous populations around the world report similar experiences and much has been documented about the experience of Aboriginal peoples of Australia and New Zealand (Bamblett et al., 2018). Similar to the TRC, the Australian Royal Commission inquiry into institutional responses to child sexual abuse found that most children had been sexually abused in faith-based institutions, mainly Catholic institutions. The majority of those reporting sexual abuse were boys (64.3%) with 50% of them reporting that the abuse occurred when they were 10-14 years old. Girls reported being abused at younger ages. In cases of abuse of both girls and boys, 93.8% of perpetrators were male.

The Center for Disease Control and Prevention (CDC, 2020) states that those who have suffered RV themselves are at greater risk. The risk factors for child abuse are the experiences endured at residential schools and systemic racism. They are not specific to Indigenous people but Indigenous people have increased likelihood of facing these risks due to poverty, racism, living on reserves, being distant from services and supports, they include:

According to the First Nations Health Authority (2020), during pandemics such as the COVID-19 when citizens are asked to stay home, RV is a serious threat to many women and girls.  Risk factors that are exacerbated are:

To understand the complexity of abuse in vulnerable groups,  such as in the Indigenous population, it is important to overlay the Intersectionality framework. Intersectionality theory explains how identity, experience and positionality intersect to create a matrix of oppression that underpins relationship violence (Cramer & Plummer, 2009; Meyer, 2010). See Intersecting Axes of Privilege, Domination & Oppression and place the person on the wheel to understand the totality of the person. Increased risk results from historical, political, and socioeconomic realities, and the normalization and generational transmission of violence that may lead to a culture that normalizes abuse. The history and impact of residential schools and the inadequate living conditions and the code of silence to protect the family and community unity may all contribute to not reporting RV (Cooper, 2017).

Part of the intersectional framework is to become/remain aware of the effects of historical and current discrimination. For example, The Indian Act enshrined into law racially discriminatory policies, such as having to renounce Indian status to vote (Justice Laws, 2019). The Indian Act also stripped women of their Indian status if the ‘married out’. The effects of this Act are still subject to challenges to the government today.

In addition to the above, economic dependency, poverty, lack of parenting skills, formal education, geographic isolation, government and historical structures in remote communities increase the risk of Indigenous peoples (Brassard et al., 2015). Across Canada, there is a history of colonialism, racism and white privilege. For many years, practitioners were told to become culturally competent and many books and articles were written on how to deal with Indigenous and other specific populations. However, generalizations were published about groups. When generalizations are applied to every single person of a given group, it leads to stereotyping. That is why oppressed people feel that the system and its services that are not informed by Indigenous knowledge revictimize them. This results in many Indigenous populations not having a sense of cultural safety.

Systemic racism and power imbalances endured by any group can be addressed through cultural safety. In nursing education, cultural safety was first introduced by Irahapeti Ramsden (2002) a Maori nurse. In her doctoral dissertation, she addressed the historical oppressions that have led to higher rates of illness in the Maori population than in the general population of New Zealand/Aotearoa. Cultural safety examines prejudice, power and bicultural relations. It can be applied to any person or group that differs on any axis of privilege, domination and oppression (age, ability, ethnicity, sexual orientation, migrant status, religious belief, socioeconomic status, education, etc.). Please, see chapter 6 for a fuller discussion. It is about the unique bicultural relationship of two people and the focus is on the service provider/employer/educator/boss to create a trusting environment and equal partnership with the person who is in an oppressed position. Only the recipient can decide if cultural safety has been achieved.  The focus is on the one with the power to reflect on their power and assumptions in order not to stereotype but listen to and understand the other person. Cultural safety is practiced through cultural humility and the following occurs:

This can result in an environment that respects diversity and is free of racism and discrimination (Ramsden, 2002).

As with all groups many Indigenous survivors do not report incidences of IPV nor access services. The Public Health Agency of Canada (2012) lists several reasons for Indigenous people not accessing services:

In order for programs for Indigenous peoples to be culturally appropriate and safe, they must draw upon Indigenous knowledge and experiences, and be informed by Indigenous practitioners and elders. In addition, they must restore connections to Indigenous identity, spirit and spirituality (Black et al., 2019; Puchala et al., 2010) and value respect, wisdom, responsibility and relationships (First Nation Health Authorities, n.d.). In addition, traditional beliefs such as connection to culture improve healing (Gilmour, 2013; Reeves & Stewart, 2015) and incorporating the wisdom of elders and story-telling decreases trauma and grief (Marsh et al., 2016; Puchala et al., 2010).

Policies written are not always policies practiced and sometimes change takes generations. There are several frameworks and action plans in existence, see agencies listed below.

Brassard, R., Montminy, L., Bergeron, A. S., & Sosa-Sanchez, I. A. (2015). Application of intersectional analysis to data on domestic violence against aboriginal women living in remote communities in the province of Quebec. Aboriginal Policy Studies, 4(1), 3-23. https://journals.library.ualberta.ca/aps/index.php/aps/article/view/20894/pdf_31

Carney, M., Buttell, B., & Dutton, D. (2007). Women who perpetrate intimate partner violence: A review of the literature with recommendations for treatment. Aggression and Violent Behavior 12, 108 –115. https://www.researchgate.net/publication/222426549_Women_Who_Perpetrate_Intimate_Partner_Violence_A_Review_of_the_Literature_With_Recommendations_for_Treatment

Ramsden, I.M. (2002). Cultural safety and nursing education in Aotearoa and Te Waipounamu: A thesis submitted to the Victoria University of Wellington in fulfilment of the requirements for the degree of Doctor of Philosophy in Nursing.

Making Sense of a Global Pandemic: Relationship Violence & Working Together Towards a Violence Free Society by Balbir Gurm is licensed under a Creative Commons Attribution-NonCommercial 4.0 International License, except where otherwise noted.