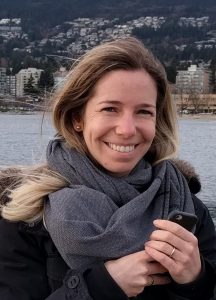 Glaucia Salgado is a Master of Arts Candidate at Simon Fraser University, Vancouver, Canada. She holds an undergraduate degree in Physical Education from the Adventist University of Sao Paulo, Brazil, in 2004 and successfully defended a thesis about older adults, physical exercises and self-concept. After receiving her bachelor’s degree in Brazil, Glaucia Salgado went to Simon Fraser University to obtain a post-baccalaureate diploma in Gerontology. She has worked with older adults as a physical education instructor between 2004-2019.

Glaucia has also worked as a research assistant at the Canadian Longitudinal Study on Aging (2015) and at the Older Adults Digital Storytelling project (2016-2019) at Simon Fraser University Faculty of Education. Since 2016 she has worked with visible minority older adults on wellness projects at Neighbourhood Houses. She is currently working on a digital open book about violence among minority groups. Glaucia has received six awards for academic excellence and is currently finishing her thesis on the role of Neighbourhood Houses on the wellness of immigrants from visible minority older adults.