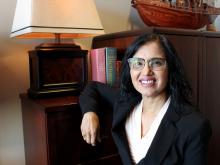 Balbir Gurm, RN, BSN, MA, EdD.  is a seasoned nurse educator at KPU, a consultant on cultural safety (diversity & inclusion) and community leader. Dr. Gurm co- led change across KPU’s four campuses (now five campuses) as the university representative on the Carnegie Foundation for the Advancement of Teaching’s Leadership Cluster Program to create scholarly communities. From this initiative she co-founded Transformative Dialogues: Teaching and Learning Journal and is its editor-in-chief. It is a cross-disciplinary journal that publishes student and faculty submissions on learning environments in order for all academic disciplines to share and learn from each other.

She has developed many projects with organizations to address health inequities and social justice issues such as gender inequality and racism. This includes providing workshops for/with the Canada Pension Plan and Review Tribunal, BC Parole Board, City of Burnaby and the Association of Multicultural Societies of BC.

She has organized, facilitated and presented at conferences across disciplines (Union of BC Municipalities Annual Convention, Canadian Nursing Association Conference, International Society for the Scholarship of Teaching and Learning and International Nursing Conference) and been a keynote speaker both internationally (Iberian Congress on Higher Education Change: Tensions and Possibilities (Ensino Superior em Mudança: Tensões e Possibilidades Congresso Ibérico) Braga, Portugal) and locally (BC Police Chiefs annual meeting) ). Dr. Gurm has written articles both for academic and community audiences. She is a known leader in the  Surrey and South Asian community due to her frequent appearances on television and radio, rallies and community gatherings where she brings forward issues of social justice.

She is driven by her passion to create a just society by influencing others to change systemic oppressive practices to more culturally safe ones and her strong belief that academics are in privileged positions and they need to use their positions to improve communities. Because of this ingrained philosophy, she has served and helped create policy and strategic plans for many organizations including: president (Moving Forward Family Services, VIRSA, Indo-Canadian Women’s Organization) vice-president (Canada-India Education Society) director (Canadian Cancer Society) and member of advisory committees (Government of BC- Health Goals Advisory Committee, City of Surrey- Diversity Committee & Surrey Coalition Against Domestic Abuse and Surrey Board of Trade- Social Policy Committee). As chair of the Canadian Punjabi Legacy project she traveled the province and conducted focus groups to understand how the Panjabis in BC wanted their history represented for she believes those who are the subjects or focus of actions need to have an equal voice. For this project she helped secure a large grant to create materials that highlight the diverse history of British Columbia in hopes that understandings will decrease racism.

As founding member and facilitator for the Network to Eliminate Violence (NEVR) she continues to work with frontline service providers to create resources and facilitate workshops to create a violence free society. She advocates for system change to governments and works with media to bring academic knowledge to the community.

As an educator and community leader she has received many honours including the: Award of Excellence in Nursing Education, NISODS Teaching Excellence Award, Canadian Cancer Society Volunteer Leadership, Shakti Education Award, Times of Canada Award for Education and Soroptimist Ruby Awards for lifetime commitment to improving the lives of women.

Dr. Gurm has a strong work and volunteer ethic that she contributes to her upbringing. She has lived most of her life in the Vancouver area. She currently lives in Surrey with her husband and three adult children. In her personal time she finds time to hike, jog and participate in yoga.