The NEVR campaign @NEVRcampaign on Twitter was started by a group of nursing students from KPU at the request of NEVR members. They wanted to use social media to address the issue of relationship violence. The NEVR campaign collaborates with community stakeholders and partners in order to advocate, educate and work to eradicate violence in relationships. There are websites, Facebook and Twitter. The campaign is managed by nursing students as part of their nursing courses on community change. While the Facebook page displays announcements and photos and it is regularly updated by a NEVR member, Twitter has been mainly used during conferences to tweet about the conference highlights. Individuals can find a great range of resources and promotions on the NEVR website, which receives the support of Kwantlen Polytechnic University. This campaign could be utilized more in the local area.

NEVR integrates politicians, survivors and local service providers into its activities to raise awareness and ask for a change in our community. NEVR also participates in the National Day of Remembrance and  Action on Violence Against Women (December 6th) 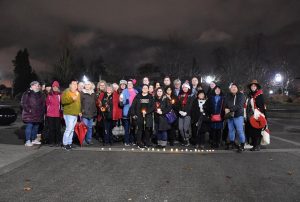 which is recognized as the Canadian One Billion Rising Campaign and also in the national OBR in a day in February. The Kwantlen Faculty Association has held a yearly event since the Montreal massacre and a yearly Dec 6 event at Kwantlen Polytechnic University and the Public Service Alliance of Canada (PSAC) holds an event for Dec 6 every year in the community and United Food and Commercial Workers International Union Local 247 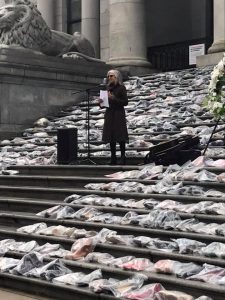 has an annual Shoe Memorial in front of the Vancouver Art Gallery to remember the women that are killed and raise awareness of violence against women and Dr. Balbir Gurm was one of the speakers in 2019. NEVR has partnered with PSAC since 2017, and Dr. Balbir has spoken yearly on various topics at the event related to RV, including the need for everyone to work together to address the issue. PSAC also started the Red Dress Campaign (Public Service Alliance of Canada, 2014) to demand justice for missing and murdered Indigenous girls and women. More campaigns are listed below.

The SaySomething campaign was started by a past BC provincial government at the request of various organizations, including NEVR. It was a bystander campaign with resources on domestic and sexual violence.  There is a website in English/Cantonese/Punjabi that has statistics and short videos that individuals can post on social media to increase awareness. It has a resources section with tabs to click: I need help, I need resources, I want to help. It also has a link to victimlinkbc (Government of British Columbia, n.d.), a 24-hour helpline.

One Billion Rising (OBR) campaign was started in 2012 with the main focus of addressing the great number of women who experience rape or sexual assault. Around the globe, statistics indicate that one in three women will be raped or assaulted during their life-course. At the beginning of this campaign, it was estimated that the number of victims was around one billion women and girls due to this number, the campaign was named One Billing Rising to show the impact of rape and assault on women/girls across the globe. It was a call to action. People around the world are asked to walk into the streets on February 14, bring signs, give speeches, etc. in order to raise awareness about violence and try to change the culture of society.

Each year, a specific theme is identified. In the Vancouver Lower Mainland area, we have a campaign for missing and murdered Indigenous women that takes place on February 14 in Vancouver, and so NEVR participates in the OBR campaign, but this is scheduled for another day that is convenient to the committee.

The White Ribbon Campaign was started in 1991 by Jack Layton (former federal New Democratic Party Leader), Michael Kaufman and  Ron Sluserin in Toronto, Canada. This international movement was created after the Montreal Massacre. The White Ribbon targets men asking them to wear a white ribbon and take a pledge to speak up against gendered violence and not to use violence. The White Ribbon campaign also raises money but does not apply for grants that women’s organizations need for funding. There is a website for the White Ribbon campaign with resources updated in 2019 that can be downloaded for free. It was the first bystander campaign in Canada. The website has definitions and signs of abuse, resources for perpetrators, support services, what you can do to help and how to promote positive masculinity and encourage other males to join the movement. Although it is not prominent in BC, there is the White Ribbon Campaign in Australia that has built on Canada’s campaign and included schools in their outreach. In BC, we have a similar campaign aimed to support schools and universities that was started much later aimed at Indigenous men, the Moosehide campaign.

The Moosehide campaign was started by Paul Lacerte and his daughter Raven, to have men and boys stand up against the high rate of abuse in Indigenous communities and call men to positive action. Men and boys are asked to wear a piece of moosehide as a brooch so that others in the community would recognize they were standing up against violence or ask them why they are wearing a moosehide. It is meant to be a conversation starter. The campaign has grown to a call for action for all genders and various resources and educational materials for K-12 students and teachers. Originally started for and with men, it now includes all gender and sexual diverse people.

Be More Than a Bystander Campaign

The Be More than a Bystander campaign was started in Vancouver BC by Ending Violence Association of BC – EVA BC and partners with the local professional football team – the BC Lions. EVA BC is our provincial umbrella organization for domestic violence service providers. Grants from Status of Women Canada, the BC Ministry of Children and Family Development,  and Encana Corporation have funded a series of videos featuring BC Lions team members teaching viewers how to speak up and act against violence. As well, the Provincial Ministry of Public Safety and Solicitor General, in the last several years, added funding to support this work. This campaign has expanded across Canada using other professional football teams. EVA’s website has many resources that can be downloaded and used.

Pink Shirt Day originated in Nova Scotia, Canada, and it became an international campaign in 2012 after being endorsed by the United Nations. This movement started after a teenage boy was bullied for wearing a pink shirt and was subjected to homophobic threats of violence. Two senior boys organized other students to wear pink to challenge bullying people for stepping outside of normative gender and sexuality behaviours. Diane Naugler (2010) provides a history of the beginnings of this campaign and discusses the forces that shape male on male bullying in adolescence. She concludes that “…the media coverage and popularization of the pink anti-bullying campaign in Nova Scotia exhibit the convention of our societal denial of the routinely aggressive, violent, and traumatizing gendered policing of young boys” (p. 360) and calls upon us to stop accepting gender policing and boy on boy bullying as normal and unremarkable.

This campaign is dedicated to working in schools with teachers, students and parents. The campaign’s signature is a pink shirt that is worn throughout the specific day and its intent is to increase awareness about bullying and engage people in anti-bullying conversations to prevent bullying among kids and adolescents. As such, the campaign has lost much of its focus on policing gender.

Farhan Akhtar, a Bollywood award-winning film director, producer, actor and singer initiated MARD – Men Against Rape and Discrimination – a 2013 social campaign, after lawyer Pallavi Purkayastha who worked with him was sexually assaulted and then murdered by her watchman in her home. In 2014, Akhtar became the first man to be appointed Regional UN Women Ambassador for South Asia and an advocate for UN Women’s HeForShe campaign.

The existence of campaigns such as these is laudable, but often there are no resources to properly assess their efficacy. Many bystander intervention programs assess attitudes and knowledge immediately after the campaign, but few evaluate long-term impacts of perpetration or victimization. For programs to be effective, they need to be sustained over the long-term. University programs for social change that are semester-long have shown long-term effectiveness. Thus, these campaigns need to be consistent and sustained over many years. The NEVR campaign relies on students, so it is not as sustainable as many other campaigns.

Canadian campaigns (mainly) are highlighted. Most of these campaigns deal with heterosexual intimate partner violence. The main messages from these campaigns need to be expanded to create a national campaign that is inclusive of all adults and children.

Carney, M., Buttell, B., & Dutton, D. (2007). Women who perpetrate intimate partner violence: a review of the literature with recommendations for treatment. Aggression and Violent Behavior 12, 108 –115. https://www.researchgate.net/publication/222426549_Women_Who_Perpetrate_Intimate_Partner_Violence_A_Review_of_the_Literature_With_Recommendations_for_Treatment

Ending Violence Association of BC. (n.d.). Be more than a bystander. https://endingviolence.org/prevention-programs/be-more-than-a-bystander/

United Nations Women. (n.d.). He for She Campaign. https://www.heforshe.org/en

Making Sense of a Global Pandemic: Relationship Violence & Working Together Towards a Violence Free Society by Balbir Gurm and Jennifer Marchbank is licensed under a Creative Commons Attribution-NonCommercial 4.0 International License, except where otherwise noted.