The past continuous or the past progressive tense is used to tell about some action happening at some time in the past.  The time of happening of the action/event may or may not be specified.

Any temporary action, and/or an incomplete action happening in the past is expressed in the past continuous tense.

The verb in the past continuous tense is made of two parts:

Sentences in the past continuous form have a specified structure:

subject + past tense form of verb ‘to be’ + base verb+ing

Example: She was not singing

Example: Was she singing?

Recap of simple past tense:

Knowledge of past continuous tense:

At the end of this chapter, all learners will be able to

Given below is an account of a day in some time in the past.  Read carefully and note the usage of verbs in the paragraph.

The last few months were so hectic.  I was doing so many things all at the same time.  I was planning to go to the mall with my friend Sadhana.  We were always looking forward for the opportunity to go out together.  As we were going to the mall, my car broke down.  We were standing by the side of the road.  We were waiting for the mechanic.  When we were returning home from the garage, it started raining. We reached home completely drenched.  It was raining for the rest of the day.  Since, we could not go out, Sadhana and I were playing cards at home.  We were feeling tired of being at home.  So, we planned to cook our favourite food.  We were cooking food, when the phone rang.  Sadhana’s mother was calling. She was coming to pick up Sadhana from my home.  She was bringing some ice-cream for us to eat. It was still raining outside, while we were enjoying our ice-cream at home.  After a while, the rain stopped and Sadhana went home with her mother.  We were having a great time together.

In the above paragraph, we see usage of past continuous tense in various situations.  Let us now discuss.

The situations in which past continuous tense is used:

Please note:  Words such as as, when, while are used to link two actions taking place in a given situation.

Exercise: Choose the correct form of the verb and complete the sentences: 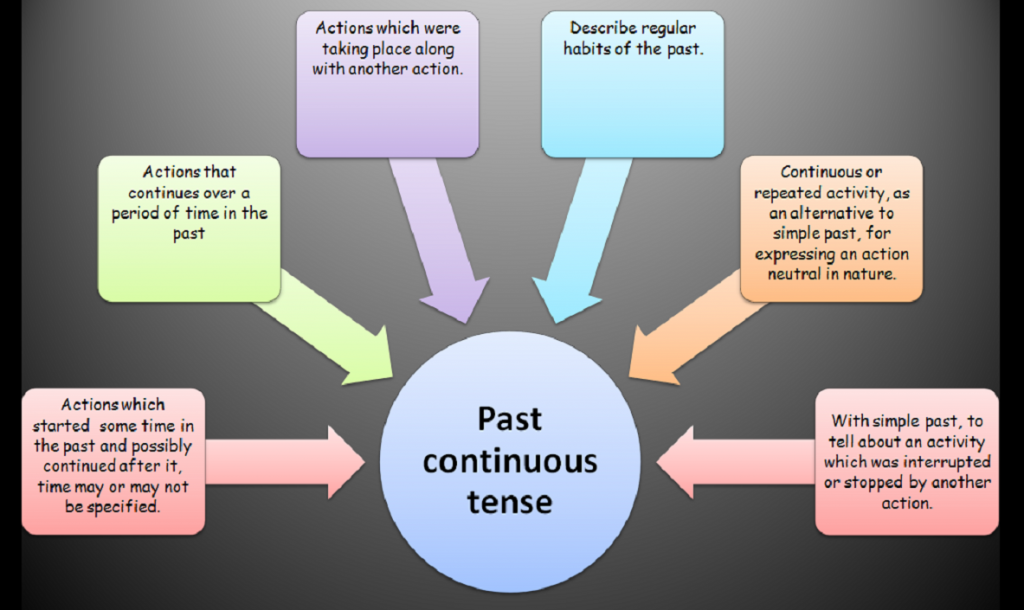 Signal words: while, when, as

Exercise: Read each sentence carefully and use the correct form of verb  as per the signal words, to complete the sentences.

Choose the correct form of verb, to fill in the blanks with suitable forms of verbs given in the bracket:

Make sentences from the jumbled words

Simple Past and Past Continuous by Annapurna Madhuri is licensed under a Creative Commons Attribution-NonCommercial-ShareAlike 4.0 International License, except where otherwise noted.