The simple future tense form of a verb has two parts:

The structure of the sentence:

subject+ will + main verb (in is original form) + object

Example: Farah will complete her homework.

Example: Will Farah complete her homework?

Subject + will NOT + participle form of main verb = object

Example: Farah will not complete her homework.

Let us discuss all these points in detail.

At the end of this lesson, all learners will be able to:

Exercise: Choose the correct form of verb tense in the following sentences to complete the sentences.

Read carefully the paragraph describing the proceedings of a training institute.  Later we will discuss it.

On Monday next, SATT will commence training its third batch of students for FST – Finishing School for Teachers.  The trainees will have an induction program and this will be followed by welcoming the students.  Welcome kits will be given away to each of the trainee.  On the first day, the session will begin at 9.30 am.  The inaugural function will start with a prayer song and other programs will follow.  All the newly selected candidates will be present at the session.  Apart from the local faculty, our support faculty from Bangalore will also be present.  Ms. Namratha Sharma, a retired principal, will be the chief guest.  She is going to deliver a session on the need for the shift from teacher-centered classes to student-centered classrooms in the 21st century.

This FST course will be a four month training program for aspiring teachers.  It will provide immense opportunities for the upcoming teachers to hone their teaching skills and also have a hands-on experience of teaching-learning processes as well as classroom management. After the successful completion of the training, selected candidates will be provided a paid internship for a period of three months.  At the end of the FST program, teachers will be school ready and they will be able to walk straight into the class and facilitate the students.  The seven month program is going to be a rich learning experience for all the trainees.

We use simple future tense to describe actions that take place in some future time to express a wish or a plan or predict the events supposed to take place in the future.

Let’s make sure we’ve understood this.

This is a bit unclear to me.  Would it be possible to create a chart that more clearly shows which form is used in which situation?

Let us now explore how simple future tense is used:

Simple future tense is used to indicate events of the future time: 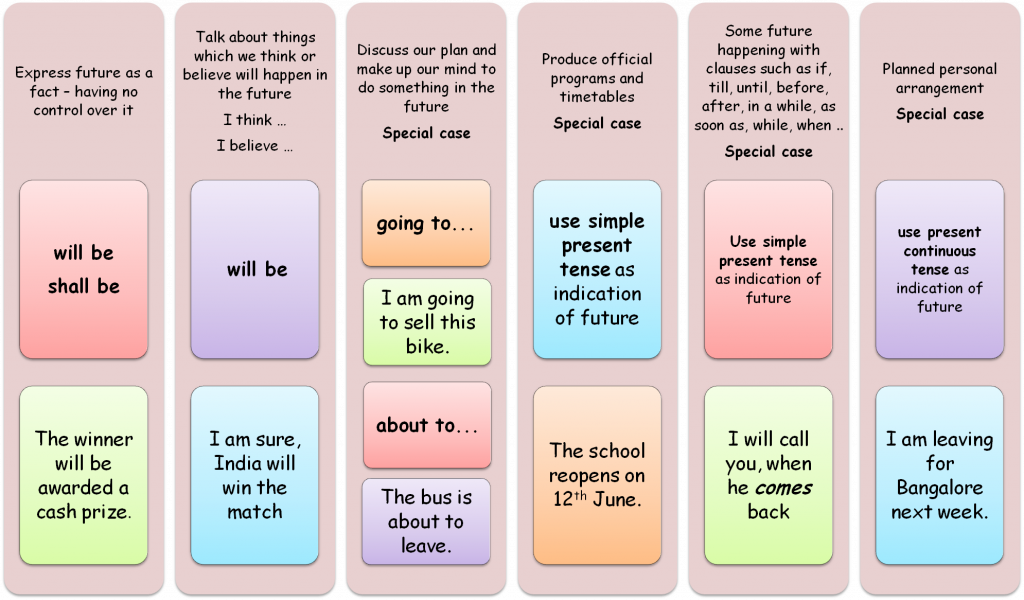 Exercise: Choose the correct form of the verb tense to complete the following sentences.

Use of shall and will in future tense:

Exercise: Use the simple future form of the verb and complete the paragraph.

Future Simple by Annapurna Madhuri is licensed under a Creative Commons Attribution-NonCommercial-ShareAlike 4.0 International License, except where otherwise noted.