In patchwriting a writer attempts to paraphrase, but ultimately imitates the sentence structure or vocabulary of the source (Howard, 1993, p. 233). Patchwriting is a common mistake, but it is NOT an accepted form of writing in academia and is considered a form of plagiarism, even if you cite your source.​

Difference between paraphrasing and patchwriting

Have a look at the original text on the left and compare it to the two restatements on the right. As you can see, in the first example the writer uses several exact phrases of the original (shown in red) and several synonyms or phrases that are very close to the original (shown in green). In addition, much of the structure of the paragraph is the same. This is an example of patchwriting, and despite a proper citation being included, an instance of plagiarism. ​

In the second example, the writer uses their own voice to express the idea of the original text. Besides a few individual words that would be difficult to replace, such as “baby boom” and “Canadians”, the original has been entirely rewritten and the structure has been changed significantly. This is an example of proper paraphrasing. ​ 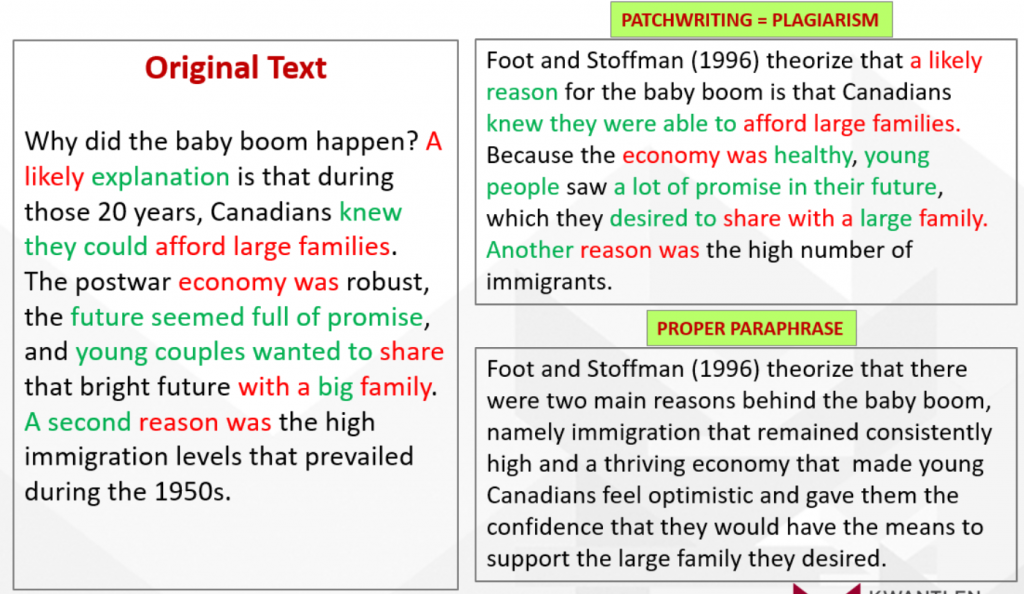 Test your understanding
Look at the rewrite below. What do you think? Is the restatement a proper paraphrase of the original text?
Source: (Pattison, 2002, p. 21).

Academic Integrity by Ulrike Kestler is licensed under a Creative Commons Attribution-NonCommercial-ShareAlike 4.0 International License, except where otherwise noted.