By the end of this Chapter you should be able to…

Physical Versus Psychological Adaptations: What are the Differences?

What is an adaptation? Typically, an adaptation is an evolved modification that a species develops in order to better survive in different environments. Adaptations can be divided into two categories: structural adaptations and behavioural adaptations. Structural are physical features of an organism such as peacocks with their spectacular plumage, or giraffes with their long necks. Whereas behavioural adaptations are unseen changes help an organism to survive and pass on genes, like birds migrating every winter. This can also be defined as functional or cognitive traits, such as mate selection which can differ depending on species. 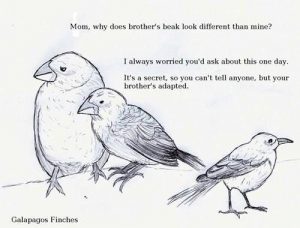 Adaptations: Evolved solutions to specific problems that contribute either directly or indirectly to successful reproduction.

To better fit in an environment, animals and humans can change overtime to increase their chances of survival and to therefore increase their rate of reproduction. Over long periods of time, this can lead to physical and biological change in the entire species of that organism. A good example of organisms going through physical change to better adapt to an environment were Darwin’s finches. It was evident through their appearance that each species had physically adapted to their environment according to their geographical location. This included the color of their feathers, beak formation, tone of voice, and general form of their bodies. Peacocks as well adapt structurally; structural adaptations are physical features such as a a bill on a bird or fur on a bear.

Different species have various types of adaptations that help them thrive and survive. An example, such as a beaver building it’s beaver dam in order for it to habituate to the surrounding it needs to gather resources as they live in both water and land. As prior mentioned some adaptations are structural and others are behavioral. Beavers have different physical features to help them adapt to both the water and land, such as their webbed hind feet and large flat scaly tail help them swim. However, their tail also helps them store fat and thermoregulate. As for their fur it helps them insulate against the cold water or on dry land. Other adaptations that the beavers to their semi-aquatic lifestyle includes their eyes, ears, and nostrils to help them survive in the new environment they travel to. Behavioral adaptations are things organisms do to survive in the environment they are in.

Adaptations are the result of evolution. Another example are birds, not all birds beaks are born the same length. One bird could potentially be born with a longer beak than the beak of other birds in the species, and their long beak helps them catch more food because if a bird can catch more food they likely to be healthier. The birds that have a longer beak catch, more food thus are healthier can live longer and are probably going to breed more. As a result the bird can pass the gene of longer beaks to its offspring and presumably live longer and continue to pass on the genes to future offspring to be inherited generations. Adaptations can occur because of gene mutations or changes by accident as well. Additionally over time animals that are better adapted to their environment survive and breed. On another note, animals that are not well adapted to their environment may not survive and have pass on good gene traits to future offspring’s. Characteristics that are percieved to help species survive in an environment are passed on to future generations and those characteristics that are not seen as beneficial will slowly dissipate. 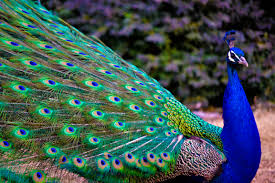 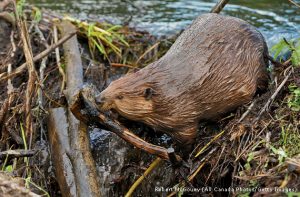 One example of psychological adaptations, is the existence of morning sickness in pregnant women. This is usually seen during the first trimester, and after the fetus has developed many of its major organs the symptoms typically disappear. Women who experience more severe sickness tend to have fewer miscarriages and fewer birth defects in their young, compared to pregnant women with milder symptoms. Evidence from various studies suggest that this is an example of fitness enhancement, where women have developed this behaviour in order to bear healthier offspring. While in the wild animals rarely, if ever, mate with parents or siblings and at the same time, humans have developed a disgust towards incest – whether that be due to religion or culture; it has been shown to be a common disgust cross-cultury. Incest in regards to reproduction is not beneficial for fitness enhancement, as incest causes deformities that causes negative effects on fitness. Fear of snakes may be considered another psychological adaptation, as Ohman and Mineka (2003) reviews several lines of evidence that suggest that this fear is found cross-culturally and across species.

Fitness Enhancement is how well a species is able to survive and reproduce in its environment.

Spiders and snakes are always at the top of the list for humans to have a natural sense of disgust and fear. Even to the point where the word might be a reason to hate the species. It is prepared fear learning: specific cues that are non-cognitive, highly resistant to extinction in order to know when to be fearful of a specific animal. For an evolutionary standpoint, associating spiders with fight-or-flight response is a selective advantage for humans to survive. Yet, spiderbites are shown to be not deadly, as their venom has not evolved to a point where they are able to harm humans; however, that knowledge does not matter as we still have an innate fear of spiders.

Well in seventy-six entry-level psychology students were shown 60 grayscale pictures of spiders, beetles, wasps/bees, and moths/butterflies and were all shown randomly and each student must rate their fear, disgust and how dangerous they thought the animal was on a 10 point scale (0= not at all to 9=extremely). What was shown that spiders were more fearful than bees/wasps, beetles and butterflies/moths at a rating of 3.61+/- 2.44. Along with spiders being top category for both disgust and danger too at 4.80+/-2.46 and 3.56+/-2.06, respectively. 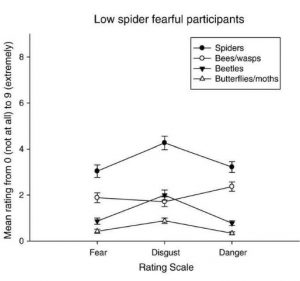 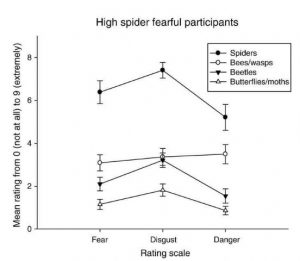 Even those students with a low spider fear still rated fearful of spiders than bees/wasps and beetles. It is most likely due to spider shaving been associated with unpredictable and uncontrollable behaviour. Like a famous quote, “seeing a spider in a room is not scary. It is scary when it disappears.” Spiders are indeed special, as the innate fear of it might have been the reason past humans have survived for this long, and now we have adapted those traits psychologically and we fear spiders to this day because of it.

Psychological Relevancy; Does it Apply to Humans?

While all of these examples are based on animals and the adaptations there are better known, and clearer to see, adaptations for humans are more subtle and sometimes not even shown at all. However, there are some adaptations in humans that are shown better when the right types of environments are presented or told about. Evolutionary scientists have tried to identify different types of adaptations and the purpose of increasing fitness should be a reason for an adaptation. Yet they still have a good idea how human adaptations can be expression, for example it well aid people in their survival leads to greater reproductive success. Adaptations are meant to be universal, and in respect supposed to share the same basic human nature. Moreover, they will be in sync with certain environments, for example: skin friction to activate callouses in hands and feet. Adaptations are also supposed to be efficient or economical, so it is better suited for humans. But what types of adaptations are actually beneficial for humans if they are supposed to be efficient and economical? Psychological Adaptations are needed to ensure survival and to procreate to make sure an individual’s genes survive. Gene survival is the ultimate goal for all organisms. Not only do psychological adaptations improve chances of survival but they also correct any flawed mutations that do not benefit the organism.

Well, human adaptations are mainly psychological rather than behavioral or physical. As we have already evolved to a point where we are able not worry about collecting food, finding shelter or finding a mate. There are specific types of adaptations that both sexes have learned in order to survive; whether that be themselves or their offspring. Women have developed morning sickness in order to protect their unborn child from illnesses, and both men and women have a natural fear of snakes in order to protect themselves.

However, these still fall into the behavioral adaptations and not psychological. It compasses all of human nature, in order to move us in our own environment, humans have developed different types of adaptations in order to live: leg muscles, big toes, skeletal posture.

Kleindorfer, S. Darwin’s Finches and Natural Selection in the Galapagos. Retrieved from https://earthwatch.org/expeditions/darwins-finches-and-natural-selection-in-the-galapagos

Structural and Behavioral Adaptations – NatureWorks. (n.d.). Retrieved from https://nhpbs.org/natureworks/nwep1.htm#:~:targetText=Behavioral adaptations are the things,are the result of evolution.&targetText=Adaptations usually occur because a gene mutates  or changes by accident!

Are Psychological Adaptations Even Possible? Copyright © by kristie. All Rights Reserved.