There are many mathematical relations that occur in life. For instance, a flat commission salaried salesperson earns a percentage of their sales, where the more they sell equates to the wage they earn. An example of this would be an employee whose wage is 5% of the sales they make. This is a direct or a linear variation, which, in an equation, would look like:

A historical example of direct variation can be found in the changing measurement of pi, which has been symbolized using the Greek letter π since the mid 18th century. Variations of historical π calculations are Babylonian

In the 5th century, Chinese mathematician Zu Chongzhi calculated the value of π to seven decimal places (3.1415926), representing the most accurate value of π for over 1000 years.

The surface area of a square surface

is directly proportional to the square of either side

When looking at two buildings at the same time, the length of the buildings’ shadows

varies directly as their height

Inverse variation problems are reciprocal relationships. In these types of problems, the product of two or more variables is equal to a constant. An example of this comes from the relationship of the pressure

Written as an inverse variation problem, it can be said that the pressure of an ideal gas varies as the inverse of the volume or varies inversely as the volume. Expressed this way, the equation can be written as:

Another example is the historically famous inverse square laws. Examples of this are the force of gravity

and the intensity of light

In all of these measures of force and light intensity, as you move away from the source, the intensity or strength decreases as the square of the distance.

These equations would be verbalized as:

The force experienced by a magnetic field

at which one travels. If it takes 1.5 hours to travel this distance at an average speed of 120 km/h, find the constant

and the amount of time it would take to drive back if you were only able to travel at 60 km/h due to an engine problem. 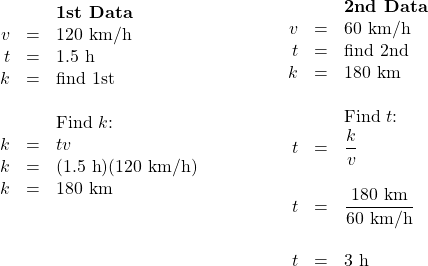 In real life, variation problems are not restricted to single variables. Instead, functions are generally a combination of multiple factors. For instance, the physics equation quantifying the gravitational force of attraction between two bodies is:

To write this out as a variation problem, first state that the force of gravitational attraction

and inversely proportional to the square of the distance

The force of electrical attraction

and inversely proportional to the square of the distance

First, decide what equation the variation represents. Second, break up the data into the first data given—which is used to find

—and then the second data, which is used to solve the problem given. Consider the following joint variation problem.

and inversely with the square of 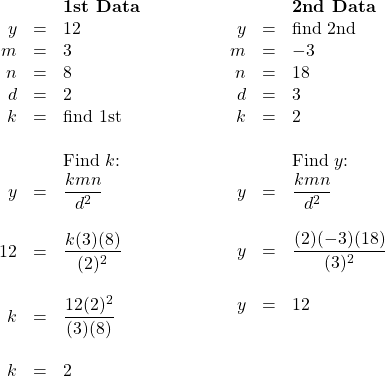 For questions 1 to 12, write the formula defining the variation, including the constant of variation

For questions 13 to 22, find the formula defining the variation and the constant of variation

For questions 23 to 37, solve each variation word problem.